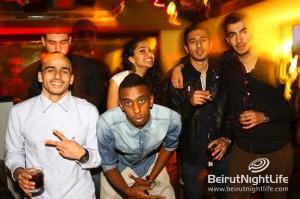 Warriors rounded up! Chocolate Club by Jojo, the hotspot in Monot known for its killer Hip-Hop and RnB nights, hosted an event that was the epitome of a great night of clubbing. The Warriors March theme took guests back to the days of Roman ruins, brave warriors and lovely goddesses. Even the classic film Brave Heart was set up to put guests in the warrior mood.

Three DJs, for this evening let’s call them warriors, delivered music to move to. Johnny Rizk hit us with an upbeat electronic sound, fun mash-ups and remixes. DJ Rony, who we all know as a former Chocolate Club resident, made his comeback and sent everyone to the dance floor. Closing out the evening was, a DJ who needs no introduction, B.S. (aka Bilal Sulaiman). B.S. delivered awesome RnB classics that took us back! Not as far back as Roman ruins but you get the idea….