Take-Off to Outer Space at B018

For the end of April B018 held an event that took you to another world. Guests tighten up their shirts and pull up their skirts to get ready for Take-Off! Beirut’s very own music production team SnareFace presented this killer event. Starting at 10pm guests were lined up at the door, all were ready for the mayhem to begin. Inside there was a bit of changes made to B018’s set up. Added LED light panels were set up specifically for the event as well as the famous retractable ceiling was covered in balloons…making us all eager to see what will happen when the roof opens up. I noticed that the number of tables were doubled, which I know means a packed house! 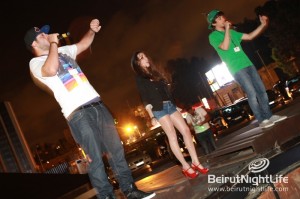 Jay-R, one of the country’s fastest rising talented DJs, opened up the evening with the finest commercial House style. Soon after the roof opened up, balloons flew out into the night sky revealing the SnareFace artists. The crowd cheered as the team of producer/rappers put on their stellar exclusive performance. Only one DJ can keep the moment going after SnareFace, Dimix hit the club with his Hip-Hop and R&B set, getting the crowd all hyped up and crazy! Finally, the night wouldn’t be the same without B018 master and resident DJ Ziad Ghosn. Ziad continued the party well into the morning hours…up until we had to come back to earth.

Check out BeirutNightLife.com’s photo recap of the Take-Off event…