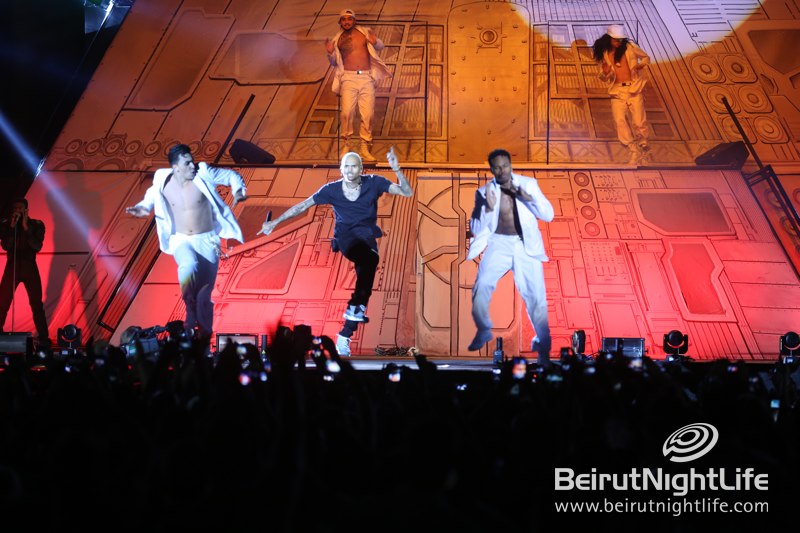 After Katy Perry and Usher’s unforgettable performances at Meydan Racecourse for the finale of the World Parachuting Championships in Dubai, it was Chris Brown’s turn to wow the UAE crowds.

Backed up by American house DJ Ian Carey, The R’n’B star appeared on stage around 10:30, to the cheers of frantic party people who joined in to the singer’s “Beautiful People”, “Wake me up”, “Turn Up The Music” and other hit songs.

Quirky characters with outfits and moves inspired by Mortal Combat’s Raiden danced around against a pyramid background with visual illustrations related to music. The set also housed doors from which the performers entered and exited the stage.

Chris Brown kept his performance diverse by changing into several different outfits, and added an element of surprise when his DJ played the all too famous Gangnam Style to which Chris actually danced for a few seconds!

A special feature of the concert was the VIP Lounge managed by the Crystal group behind People; Dubai’s most famous club. VIPs enjoyed an all new clubbing experience with the combination of a People-like lounge within the concert venue at Meydan Racecourse. These “beautiful people” were well entertained when Chris Brown “turned up the music” and R’n’Bied the night away.

The end of the performance was highlighted by CO2 jets streaming up from the stage, and Brown thanking “Dubai” for the warm welcome.

Well Chris Brown, you are slowly starting to make us forget your bad boy image… Keep it up!