After touring in Europe and signing with UK label, Lebanon-born SLUTTERHOUSE will play in Beirut for the first time to launch their debut album MADE IN DANCE. 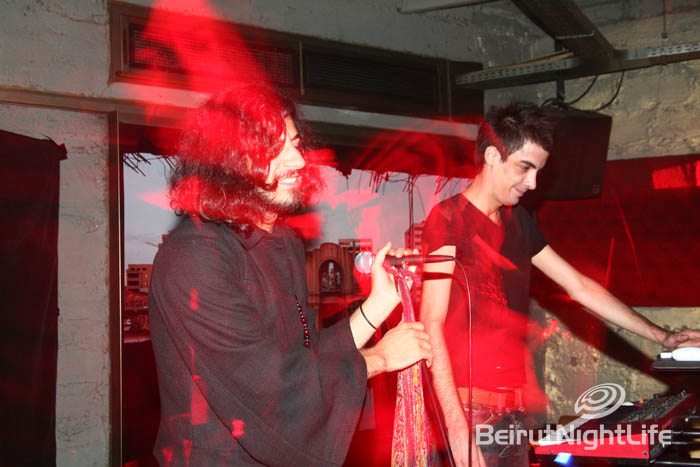 Slutterhouse could be described as an outlandish crossover between underground electronica, mainstream club music, and rock n’ roll. But most importantly, Slutterhouse’s sound is the result of an alliance/tension between two very different personalities: Rabih Salloum and Nabil Saliba (aka Trash Inc). Influenced by rock icons such as Marc Bolan, Slash, and Steven Tyler, Slutterhouse front man Rabih Salloum grew up as a guitar player/singer in Beirut’s underground music scene. His surprising collaboration with Nabil Saliba, a sensational electro producer and one of the top leaders of the Beirut electronica scene, took place in 2006. The duo has been since delivering intense dance floor songs, introducing Rabih’s pop/rock voice and melodies into Nabil’s space-themed retro electro sound, and completing the 10 tracks of Made in Dance that will be released with new UK record label Ringside Production.

The Slutterhouse members – who do not live in the same country – completed the album almost three years after their first musical encounter. During this period, lead singer and songwriter Rabih Salloum established a name for Slutterhouse in Europe. He shared the stage in Paris with artists such as Yan Destal (Modjo), the Holloways, and Lifelike. Additionally, he has been singing with New Old Stock (Daft Punk’s protégés), DJ-ing with three-time Swedish Grammy Awards winner Andreas Kleerup and Milan’s new sensation producer and DJ Vincent Vargas between Stockholm, Copenhagen, Paris and Ibiza. He has also worked with genius producers like Eric Chedeville (Daft Punk, Sebastien Tellier) and Dimitri Tikovoi (Placebo, Sophie Ellis Bextor, Nick Cave, Kill The Young).

On the other hand, the band’s producer and co-songwriter Nabil Saliba (aka Trash Inc.) has played his electronica live sets all over Lebanon and several of Beirut’s night clubs (The Basement, B018, Club Social). In the summer of 2008, he shared the stage with Sebastien Tellier and Mouse on Mars at the Byblos International Festival. He also released Trash Inc’s debut album Ultramind last May 2009 and has since been working on remixes for renowned artists including Fritz Helder and the Phantoms; first signature of Nelstar – Nelly Furtado’s new record label.