How to Play Drinking Games! 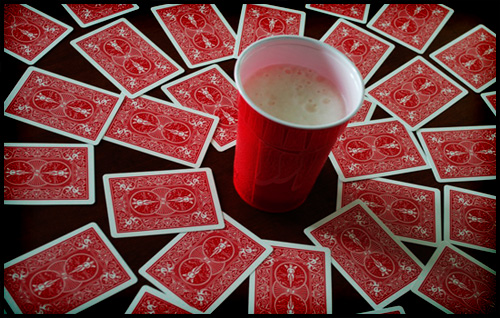 Ok, so getting drunk can be fun but let’s be honest it can also get pretty old. I compare this to a relationship that has been going on for too long, it needs something to keep it exciting…. a kick in the right direction if you will. Sometimes you just gotta spice up your night of drinking with a game! I have noticed that in Lebanon drinking games aren’t played too often, so I am here to change that. Below are a few ways to put a fun spin on your alcohol intake….

Two people play this game head to head just like a boxing match, with the other 2 people helping them out being their “corner men”. Sit at opposite sides of the table and each roll a die. Whoever scores lowest on the die takes “the punch” and drinks their shot. The corner man fills the empty shot glass as quickly as they can and you roll again.

It’s a fast paced game to say the least. You play in 3 minute rounds with a 30 second rest in between rounds. We play until someone quits or pukes. **You could play a limited number of rounds to prevent this though. 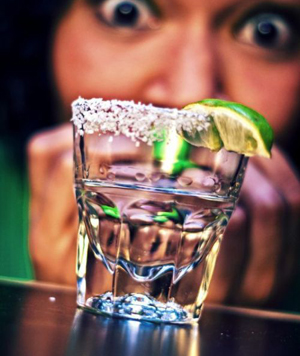 Flip to Sip, or Strip!

The game is best with 3 to 5 people, but more and the game will last longer. The rules are simple. Flip a coin and while it is in the air, call heads or tails. If you guess right, pass the coin to your right (you’re safe). If you guess wrong, pass the coin to your left and either take one article of clothing off (anything that is a pair counts as one item) or drink a shot. One catch, you cannot do the same thing (sip or strip) more than twice in a row, this keeps the game interesting. 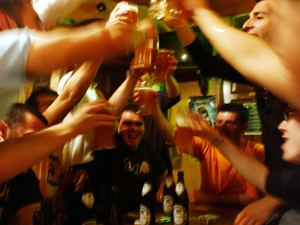 Shuffle a full deck of cards and scatter them in a pile in the middle of your table. One player goes at a time picking one card. They flip over their card, displaying it to everyone. Each card has a different rule as follows:

Ace: Take one drink
2: Take Two drinks
3: Take Three drinks
4: Questions – You look at the person of your choice and ask them a question, they must answer your question with a question and it keeps going until someone screws up. Ex. What is going on? Why do you love yourself? **You don’t have to question the person who questioned you either just make sure you make eye contact.
5: Give five drinks (not take yourself, you chose who takes 5 drinks you can pick more than one person but no more than 5 drinks)
6: I never. This is where the person who flipped the card says something they have never done and anyone who has done it must drink.
7: Thumbmaster – This person puts their thumb down on the table whenever they want and the last one to put theirs down drinks. The thumbmaster can do this as many times as he wants until the next seven is picked.
8: Categories – The first person gives a topic/category and in rotation, everyone else must give a kind. Ex: Toothpaste, Crest, Colgate, Mentadent, etc.
9: Rhyme – Everyone must give a word that rhymes with yours. Ex: Shoe…glue…you…etc…
10: Social – Everyone drinks
Jack: A**holes drink aka guys drink
Queen: B****es drink aka girls drink
King: Waterfall – This can be extremely hard, depending on your group of drinkers. It goes in order first being the one who picked the card and so on. The first person drinks as much beer as they can continuously and the 2nd person can’t stop until they stop, the 3rd person can’t stop until the 2nd person and so on. If you have big drinkers at the beginning, it is really difficult.

These games really are a blast. If you have a group Fubar is by far the best! Give it a try and let BeirutNightLife.com know how the night of fun went in a comment below…