The angel in the sky, the prestigious rooftop, White Beirut hosted a glamorous night with the trance legend Paul Oakenfold. The crowds danced the night in the skies of Beirut on the beats of the trance master recording another night in the list of successful events White is holding this summer. 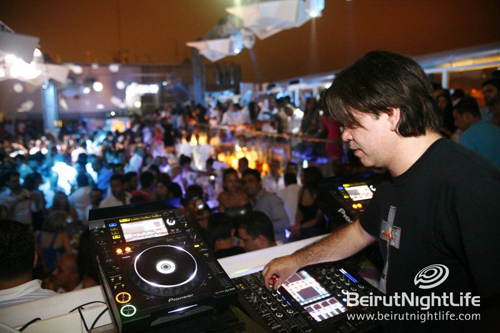 Paul Oakenfold has been touted as one of the world’s leading DJ/remixers by various outlets including CNN, Rolling Stone, BPM, Remix and more.

In 2007 Paul Oakenfold released his Greatest Hits & Remixes through Perfecto/Ultra Records –a 20-selection strong collection of his seminal dance recordings and remixes. Its track listing ranges from original productions such as his massive singles “Starry Eyed Surprise” “Ready Steady Go,” and “Faster Kill Pussycat” featuring Brittany Murphy. In addition, there are remixes galore of artists like Justin Timberlake, U2, Madonna, The Smashing Pumpkins, Radiohead and Underworld and soundtrack pieces such as David Arnold’s James Bond Theme from the motion picture Die Another Day and Oakenfold’s “Dread Rock” from Matrix Reloaded.