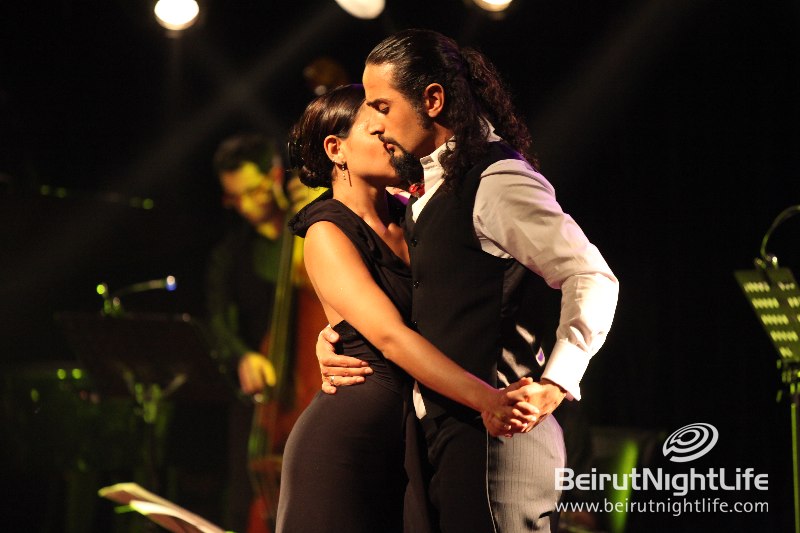 As always, Music Hall brings us the creme de la creme in local and international talents, shows and performances. In collaboration with the Beirut International Tango Festival, Music Hall presented ‘Noche Del Tango Negro’ , a live Argentinian tango concert and show.
The night featured some of the most renowned artists on the international tango scene, from musicians to dance maestros from different parts of the world including Lebanon. BNL was there to capture the true passion of Tango dancing on the stage of Music Hall.
In these picture we capture the show in whole, including a performance by Mazen Kiwan from Lebanon and Cecilia Piccinni from Argentina, who performed in front of a full house, embracing every move and every moment. All the artists on stage were breathtaking.
The Orchestra: Silencio Orchesta Tipica is a a group of internationally recognized musicians, who have come together to form one of the most renowned Argentinina tango orchestras on the international scene. The group lead by Roger Helou, an Argentinian pianist of Lebanese origins, has released their third album ‘Silencio en las Almas’, as a follow up to their successful ‘Silencio Live in Berlin’.
The orchestra focuses its work on newly arranged Tango music, while adapting the best of traditional Tango sounds.  Silencio has been touring and performing for 10 years, in the leading Tango festivals across Europe, including Paris, Copenhagen, Moscow, Berlin, Zurich, Milan, Amsterdam, Stockholm and Zagreb.
To know more about all the artists check www.tangolebanon.com