Mini-B is a fresh, talented, successful DJ who is climbing the ladder of music entertainment. Being born in Lebanon in the post war 90’s Mini-B was able to focus his attention on music. Mini-B could be found lurking in record stores at the mere age of 10. His passion for music, as well as his need to spread it led him to create, in summer 2009, VIBES PRODUCTIONS an event organizing community for the youth in Lebanon. Since then Mini-B has joined the NRJ Mastermix crew, has created his own show “The Vibe Sessions” and can say he is the youngest DJ in Lebanon to have played for a crowd of 25,000 persons. It is safe to say that Mini-B is an individual that any young aspiring DJ can look up to. I hooked up with Mini-B to get the inside scoop on the young sensation.
How did Mini-B get his start DJ-ing and where do you currently spin?

Music, in all its colors, has always been a passion of mine. I started listening to tracks and buying CDs at a very young age. At one point it just became obvious to me that it was my vocation. At the age of 14 I took on some courses at Per-Vurt where I was taught basic and advanced techniques. Soon after, I started getting paid for gigs, playing up to 3 events per weekend. I met a few interesting people who helped me move further into the scene and caught the attention of the guys over at NRJ. They offered me a spot on the deck to which I immediately said yes! Since last year I’ve had my own show every Saturday at 8:00 PM with a growing number of listeners every week. I’m also mixing both at private events and NRJ sponsored events.

This all sounds like a blast, is there difficulties in being a DJ?

The major problem for a young DJ like myself in Lebanon is mainly the lack of support from organizations and administrations, but NRJ has truly made up for that and more. Also, the great numbers of newcomers in the scene makes it difficult to standout in the crowd and earn a reputation. I can’t say I haven’t had my share of problems and difficulties throughout my short career so far, but what I can say is that as long as you’re doing something you love and are passionate about, no amount of obstacles can stop you from doing it. A DJ who loves what he’s doing, knows how to react to the crowd and play the music the people want to listen to.

Lebanon is known for party lifestyle. Do you find it easier to DJ in this country because people are always ready to have a good time?

Lebanon is a party paradise. That said, Lebanese partygoers are some of the most experienced and picky crowd when it comes to dance music. Satisfying their ears is not an easy job. Younger people tend to be much more into mainstream and commercial music, however the older the public gets the more difficult it becomes to satisfy everyone out there. A DJ must find the balance; change the style and the mood every once in a while to keep everyone rocking it out on the dance floor.

Do you have a favorite show or event you have DJ-ed? 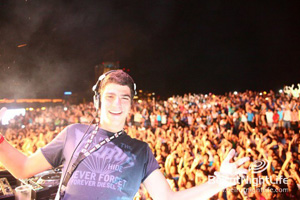 NRJ MUSIC TOUR 2011 was definitely the best and the biggest event I’ve Dj-ed so far. The thrill of playing in front of over 24,000 people, next to internationally famed artists like Flo-Rida, Inna, Alexandra Stan, Chipmunk, Iyaz and many others, was simply amazing. Also being the youngest DJ out there blew my mind! Another great experience was my gig in Paris in October, it felt refreshing to play for a whole new crowd in another country. Music truly is an international language.

Do you have any influences when it comes to your work?

I can’t really say I have “influences” when it comes to my work, although I would say that some of my favorite DJs are Martin Solveig, David Guetta and Avicii. They really know how to captivate the audience, which is always my number one objective.

What advice would you give to an aspiring DJ?

It’s a tough business but any talented DJ with the mindset needed for it can make it in the scene. As long as you love what you’re doing and you believe in it, up is the only way to go. Brian Littrel once said: “Shoot for the moon. Even if you miss, you’ll land among the stars.” I live by that saying and I think any ambitious person should too.

Do you have any last words or messages for the people of Lebanon?

All I can say is that I’m proud of my nation. Despite all our political and economical problems, we have managed to develop and flourish our nightlife thanks to a global effort from the whole community. I hope we stay on these tracks to someday become the number one party destination in the world!

The Grind: This is a short answer questionnaire. When Mini-B was given a word he was to answer with the first thing to pop in his head. 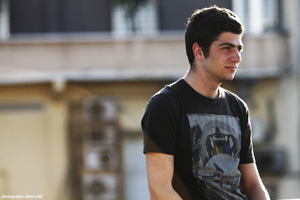 Keep up with all Mini-B happenings through his Facebook fan page
www.facebook.com/DJ.MINI.Bhttp://www.nrjlebanon.com/Mastermix and don’t forget to enjoy the music via his show “The Vibe Sessions” every Saturday on NRJ 99.1FM.

Newer Post Music Sharing Monday on BeirutNightLife.com
Older PostB Lebanon: At the Lowest Price Ever for Limited Time Only on Breedo.com!