Get Lost at Sea with BeirutNightLife.com

All summer long party goers have been getting lost at pubs, rooftops, and clubs all around Lebanon… but now it was time to get Lost at Sea! WonderBox Entertainment presented the ultimate event, allowing everyone to get Lost at Sea. Numerous big named sponsored backed the epic event out at sea. The boat party was a huge success. It was a packed boat as beautiful party people climbed aboard, to depart from the Marina Joseph Khoury around midnight…not to arrive back until the early morning hours. 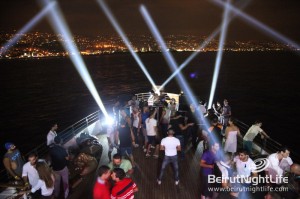 The ultimate boat party went off! Complete with professional dancers in costume, sexy male performers decked out in handy man construction gear and more, moved for the upbeat crowd. Jugglers threw up flaming rings backed by flashing neon lights and lasers to complete a spectacular show. Big names in the DJ scene spun throughout the evening. Big Al, Ronin & Nesta, Jay K and Psychcogenesis all supplied tunes throughout the night.