Growing up, my clubbing days were spent in the legendary street of Monot. Today, my then-favorite places have all been demolished or abandoned. Political unrest and drug-related incidents led to the street’s nightlife’s eventual demise in 2005.

The waning of Monot though paved the way for the waxing of Gemmayzeh’s nocturnal agenda. Some 200 pubs, clubs and restaurants moved onto Gouraud Street and its derivatives. In a matter of weeks, Gemmayzeh had become the unofficial nightlife capital of Lebanon. The street also helped Beirut get the international tourism top spot back in 2009, which the New York Times attributed to fantastic gastronomy and exceptional nightlife. 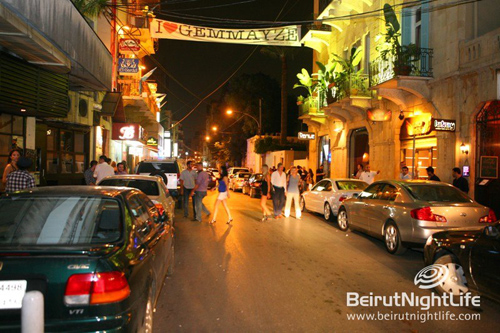 Gemmayzeh’s journey has been a bumpy one though. Three consecutive Lebanese tourism ministers have made it their personal legacy to clamp down on the vibrant nightlife in Gemmayzeh, and with good reason…

The pubs and clubs are all located in or around residential buildings. The sometimes-ancient architecture and infrastructure in Gemmayzeh does not make for good sound insulation. Loud music inside the pubs though was not the only issue that had residents, pub owners and the government at odds.

The traffic jam that has become synonymous with Gemmayzeh is a huge inconvenience for local residents. One foreign pubgoer told marcomlux.com it took them one hour and forty-five minutes to get from Chez Paul to Sinners Pub. You can imagine how frustrated you would be if it took you that long to get to your apartment building. What make matters even worse are the scarcity of parking lots and the unprofessional work of valet parking service providers.

So, an hour-forty-five-minutes to get to your building, and then not finding a parking spot, or having to pay as much as 50000 LL to do so, were the main driver behind the residents’ uproar that has contributed to Gemmayzeh’s recession in the past few months.

This hostility and tension between the parties involved has damaged Gemmayzeh’s image and cast doubts about its economic sustainability. In some instances, it has turned ugly, and marcomlux.com decided to pound the pavement and find out what’s really happening…

After considering the traffic, parking and music issues above, the government issued a law that specified 2:00 AM as a mandatory closing time in the weekends, and midnight on weekdays. Failure to abide by these laws would constitute a 25 million LL fine. Of course, the establishment needs to ensure it has double-glazed windows, two doors and other soundproofing techniques and materials before welcoming customers.

Even the best soundproofing cannot stop drunk passerby from creating a fuss outside the pubs and on the streets. The government’s answer to that issue was deploying dozens of battle-ready police officers on every corner.

These measures have been tough on the pubs and many have resorted to alternate solutions to the curfew obstacle. One pub manager admitted to marcomlux.com, on condition of anonymity, that his establishment provides air conditioning, electricity and soundproofing, free of charge to the residents of the building where his pub is located. This pub stays open well into the night, disobeying the set curfew with no consequence, since none of the neighbors file a complaint considering the sweet deal they are getting.

Another pub manager complained that the heavy police presence distresses clubbers, especially foreigners. What was remarkable is that the same officers stood idly by as valet parking workers created a traffic jam that choked the entire street. What made things worse for the aforementioned manager is the apparent singling out of Gemmayzeh when it comes to excessive law enforcement on the street. “Why don’t streets like Hamra or DownTown have as much darak as Gemmayzeh?”

These comments highlight some political tension that has wormed its way into the nightlife debate. The Gemmayzeh boom, to some analysts, was attributed to the closure of DownTown Beirut due to the sit-in staged there over a period of several months. Some politically-motivated clubbers and bar managers believe the exceptional military presence in Gemmayzeh is a retaliatory action to try to tone down Gemmayzeh’s nightlife and bolster the industry in other parts of Beirut.

Getting back to more tangible issues, some of Gemmayzeh’s woes come not from the residents, nor the government, but the pubs themselves. Before going into a pub, we read and noted the menu posted on the store’s front. One pub (A) listed an Almaza beer for 8000 LL a bottle. When the bill arrived, it was 20000 LL for 2 beers. What’s funnier is that the pub next door (B) had listed an Alamza bottle for 10000 LL. So, a clubber faced with a choice between pub A and B, would definitely choose A, only to be ripped-off later. Apart from being dishonest to the consumer, this shady practice is creating an unfair edge for the pub being dishonest with its prices.

Another unfair edge when it comes to drink prices is the status of the venue itself. If a pub pays 5000 USD/month to rent out its venue, it will have to charge more for the same drink being served by a pub that is owned by the pub’s management. This is reflected in the infamous 2000 LL shot vs. the 12000 LL shot every clubber has noticed in Gemmayzeh.

To conclude, marcomlux.com sought out possible solutions to the many hanging issues. The first among them is that the law has been revoked and no curfews are being enforced at the moment. However, people have the impression that pubs still have to close at midnight, and therefore don’t bother going down. Well, now you know that is not the case, and the pubs areclosing early these days because of lack of customers, not government laws.

Apart from raising awareness about Gemmayzeh’s current laws, marcomlux.com believes the Lebanese government has a crucial part to play in regulating Gemmayzeh and allowing it to flourish. Gemmayzeh has become a lucrative and world-renowned destination that Lebanon cannot afford to lose. However, the transgressions of some clubs and pubs are unfair to the residents and a compromise must be reached. That is why a system of benefits and tax cuts can allow anyone to soundproof his or her home with no extra charge. Also, transforming the street into a pedestrian zone would eliminate the choking traffic jams and get rid of valet parking providers that have proven incapable of properly maintaining an efficient parking
scheme.

Though a more urgent and effective role corresponding ministries can play is one where prices are regulated and consumer rights are protected. Ensuring the prices are legitimate is only the first step. The ideal solution to unfair competition and dirty tricks would be to formulate a system to calculate drinks prices according to the venue’s expenses (such as size, rent, etc.)

The list goes on and on, and one must stay optimistic. The recent slump in business might be due to the summer season, where clubbing shifts to the beachfronts and rooftops. So the only way to find out whether or not Gemmayzeh will be another Monot, is to wait for the winter season and see if the street’s fortunes turn.