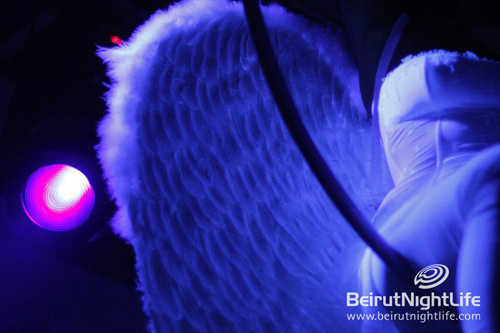 Everyone was invited to celebrate Gauloises’ “Liberte Toujours” theme as the Basement’s gruesome twosome, Jade and Diamond Setter, spun their trademark house and tech-house well past the usually Gemmayzeh curfew.

Access to the event and drinks were free, and the Gauloises teams had loads of freebies to giveaway. From LED lights and pins, to special edition cigarette packs, lighters and glow sticks, each clubber adorned themselves with the merchandise after having their face painted at the door.

Then, after all the gear was in order, a picture was taken of every participant edited to look like the Gauloises trademark ads, and printed, also for free. The venue had served once as a printing press and later a garage, but on the night, the location was completely transformed.

Huge AC units, blue neon lights, black light floodlights, and LED screens adorned the venue, with a bar extending several meters and sexy dancers hovering over the crowd. The visuals were as good as those in the Basement’s Dome event, enriching the experience even further. Glow-in-the-dark graffiti also could be seen in the hallways of the old press.

The event was a welcome concept in Gemmayzeh. Hundreds of clubbers spent the night in the venue, while hundreds of others passed by after finishing their business elsewhere in Gemmayzeh. The underground music and ambience kept true to the Liberte Toujours spirit, and clubbers present were delighted for spending an evening of good drinks, awesome music and great atmosphere, all for free!