DJ T at the Basemant 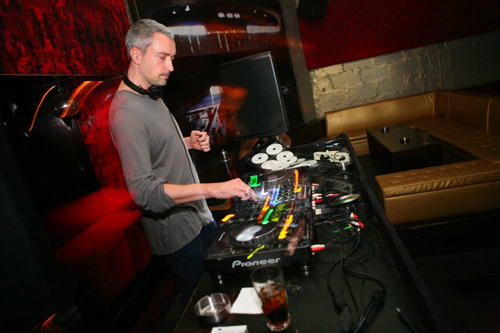 The Goethe- institut presented DJ T from Berlin at the Basement Saifi. Thomas Koch, also known as DJ T, along with the one half of the Basement residents Diamond Setter, gave clubbers of the underground venue, a taste of glam, funk, beats and bass. The experienced DJ did not keep back any of skills allowing Basement’ers to dance the night off.

Thomas Koch aka DJ T. has been a vital part of music and club culture for more than 20years, during which time he has built up a reputation in a range of different capacities: DJ, label owner, producer, event organiser, club operator, publisher and journalist. In 2005, he relocated to Berlin, where he’s been living and working ever since.

Blame it all on the disco ball. Born in 1969 in the city of Dusseldorf, at the tender age of nine Koch succumbed to the seductive charms of black wax. By this time, his family had moved to Frankfurt, and disco had reached its zenith; Koch’s parents plied him with early vinyl compilations, triggering what would become a serious and lifelong collecting streak. T.’s burgeoning obsession went beyond disco and hi N-R-G – Village People, Donna Summer and Evelyn Thomas were soon followed by early rap music (via Grandmaster Flash) and finally – from 1983 – electro funk and its seminal protagonists Afrika Bambaataa, Planet Patrol, Newcleus and Mantronix.

Their tracks had everything Koch craved: glam, funk, beats and bass. They were the soundtrack to a new dance culture. For Koch, this was love at first sight and he decided to take up breakdancing. Until this day, many of DJ T.’s own productions preserve the musical spirit of this period. Some loves do last forever.