Desyn Masiello at the Basement 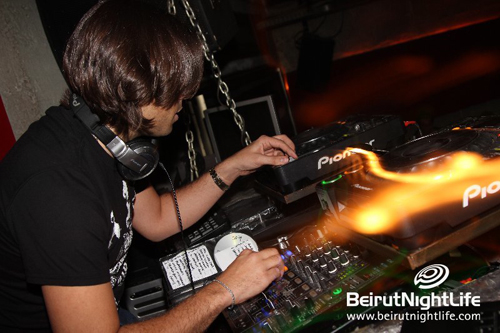 Six years of pioneering event concepts, exclusive sets and performances, diverse talents and orgasmic audiovisual experiences that would have any electronic music connoisseur astounded, and the Basement still has the potential to surprise and delight.

Desyn Masiello flew into Beirut on Friday October 8th, 2010 to perform at the Basement. John Digweed once described Desyn as the man who never sleeps, and right he was. The blend of sounds and vibes that Desyn mixes up so seamlessly can be a result of no less than thousands of hours in the studio.

That night most certainly qualifies as one of my most memorable and fun evenings at the Basement. The crowd, the music, the drinks, the lights and everything else seemed perfect. The packed underground club was moving incessantly for hours.

Instead, a concentrated look on Desyn’s face while his fingers manipulated the equipment had everyone focusing on what was blaring out of the speakers. Desyn’s chosen platform was the elevated, out-of-the-way DJ booth, which is similar to a preacher’s platform conveying messages far from strife and hatred, and all about love and happiness.

The crowd was a sophisticated one. A nonverbal consensus that this is as good as it gets had everyone smiling, looking smart and hanging on well into the hours of the morning. After the better part of a decade has elapsed, and the Basement’s time running out, the Basement Movement continues to dazzle clubbers, both regulars and newbies…