Getting Busy with Sean Paul Live at Pier 7 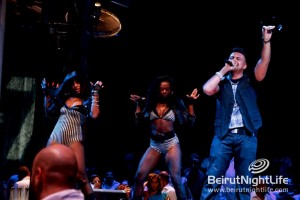 Hip-Hop, Pop and Reggae specialist Sean Paul has a song entitled “Give me the Light”. Pier 7 and NRJ Radio Lebanon did just that by giving him the figurative green light to perform live at the coliseum by the sea. With 5 albums under his belt, at least 18 award nominations, 6 of which he won including Grammy for Best Reggae Album, Sean Paul has had the ability and pleasure of touring the globe performing for his fans around the world. This time he made his way to Lebanon.

Pier 7’s professional and resident DJ’s warmed up the crowd before Sean Paul was ready to take the stage. Soon after Sean Paul’s DJ duo took over the decks to prepare for Sean Paul’s entrance.  It was time, Sean appeared from the underground via the elevating stage. Along side him were two dancers adding movement to his live act. Partygoers who were lucky enough to have caught the show were more then pleased with the performance as Sean Paul played for at least an hour. He performed a beyond full set of his most popular hits as well songs off his newest album.  I’ve got to give it up to Sean Paul for a stellar performance.