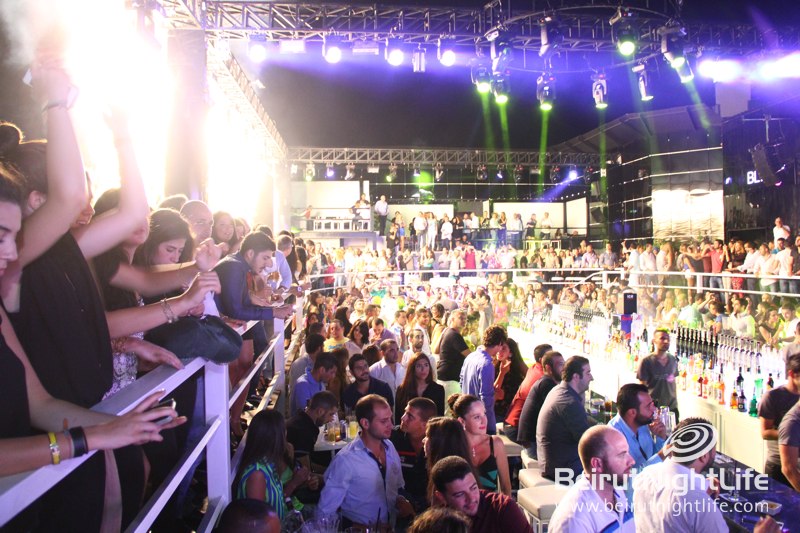 What a way to stir it up! Bursting onto the nightlife scene in Lebanon is BLVD 44, the newest open air rooftop in the country that is going to be “the place to be” all summer long. Coming all the way from Montreal, BLVD 44 has finally launched in Beirut with a grand opening extravaganza on Saturday night. The sensational night ushered in the club with fireworks, international Hip Hop sensation Big Ali, fun party vibes, flowing drinks and food, and incredible music.

The beautifully decorated nightclub is oval in shape, with a massive bar in the center, surrounded by high tables, and elevated levels of tables and lounges, all white, plush and very inviting. Balconies were sprawling with people getting a view of the place. On one end is a DJ booth and stage, and opposite are two smaller upstairs bars pouring out titillating beverages for guests. Some sides gave patrons views of the sea, while on others there were sleek black walls with lights, and white walls for projections. Light beams came from everywhere, lighting up the crowd and giving the place an amazing party feel.

After entering the building and walking through a neon tunnel to the elevator, the curious guests were lifted up to the venue. The elite party crow of Beirut began gathering under the stars on the Jal El Dib rooftop early, chilling, socializing, drinking and eating until an official announcement of the opening was made, followed by an astounding and artistic fireworks display that didn’t seem to end. Bursts, explosions, flames and sparks of every color of the rainbow lit up the Beirut sky, announcing the arrival of BLVD 44 to all.

And then the party really began! Resident DJ Mass was on the decks and international DJ Jack Sleiman MCed the night, getting everyone in the house revved up and ready for action. When Big Ali came to the stage with his personal DJ Kash and hot dancers, the crowd went wild. He performed for well over an hour, giving the crowd a taste of his new songs and collaborations as well as old favorites that got everyone singing along. He put on quite the show and was incredible interactive, getting the crowd to sing, fill in words, and do some dance moves along with him. Occasional cascades of sparkling fireworks and spitting fire on the sides of the club thrilled the party people in the place. Everyone in the place had a blast, danced and enjoyed the new venue to the full. If this is just the beginning we can’t wait to see what’s coming up! BLVD 44 is already promising to bring 44 acts to perform at the place this summer.

We’d been anticipating the opening for quiet some time, we’ve been doing the “4”, we’ve been getting ready and waiting for the night to come… and it was well worth the wait! The Beirutnightlife team was there to witness the grand opening and partied all night long, and we took lots of pictures to prove it. Check them out and be sure to head to BLVD 44!