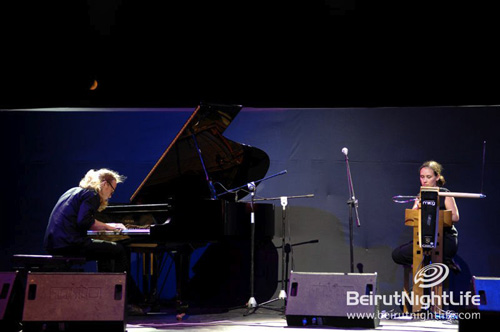 Pamelia Kurstin at Batroun Interntional Festival 2010 with eclectic classical and jazz sounds in the outdoor space at Batroun in North Lebanon.

She excavates a dusty artifact from the prehistoric strata of electronic music — and demonstrates how to squeeze soul from an instrument you can’t even touch.The theremin, the first electronic instrument ever invented, was on the brink of historic oblivion when it was rescued from obscurity by director Steven Martin’s classic 1994 documentary Theremin: An Electronic Odyssey.

And while a few brave souls have sought to master this temperamental instrument since then, none have done so with more sly effervescence than Pamelia Kurstin. Born in Los Angeles, Kurstin currently resides in Vienna, and performs with acclaimed eccentric rockers Barbez, among many others. Her latest solo CD, Thinking Out Loud, was released in 2007 on John Zorn’s legendary Tzadiklabel. She’ll bathe your dog and give you a haircut (“if you’re daring,” she warns) in exchange for a six-pack