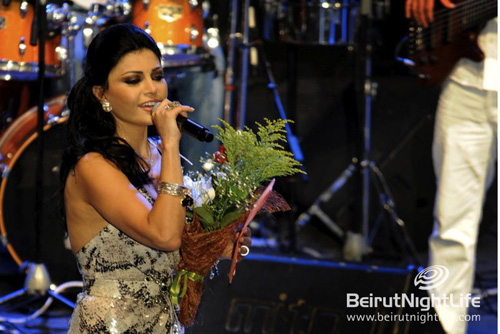 As part of the festive of Batroun International Festival 2010, the hottest Lebanese Diva Haifa Wehbe along with the Lebanese comedy phenomenon Bassem Fghali held a memorable night in Batroun, in Northern Lebanon. The crowds sang along the Lebanese beauty and enjoyed the best of her hits. Bassem was another twist of the nights with some of his best sketches and imitations to Lebanese and Arab characters.

On June 10, 2006 Haifa became the first artist in the Arab world to perform with rapper 50 Cent when she performed as an opening act for his first concert in Lebanon, at BIEL in Beirut. On July 4, 2008 Wehbe released her long awaited new album Habibi Ana which contains 15 songs including the single “Mosh Adra Astana”.

Wehbe was born to an Egyptian mother and Lebanese father. Her three sisters are Alia, Hanna and Rola. Haifa’s brother died at the age of 24 during the 1982 Lebanon War. Wehbe was ranked 49 in the 2006 Edition of the Top 99 Most Desirable Women by the website AskMen.com.

Her latest album was launched in 2010 (Baby Haifa), and this year is bringing yet a new international step Haifa Wehbe with a duet with David Vendetta . Yama Layali will be released very soon in the Lebanese market and expected to hit the charts.