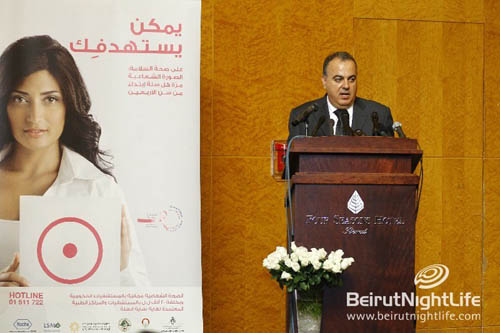 The Ministry of Public Health and Hoffmann-La Roche launched at the Four Seasons hotel the 2010 National Breast Cancer Awareness Campaign entitled ‘You might be the target’. The campaign was launched under the auspices of the Lebanese First Lady Mrs. Wafaa Sleiman and was attended by the Minister of Public Health Dr. Mohamad Jawad Khalifeh, the breast cancer Official National Committee and members of the press.

The nation-wide awareness campaign is set to run for three months enabling women to gain access to discounted mammography exams which will remain available till end of December 2010. Participating private hospitals and medical centers across Lebanon will reduce their mammography fees to L.L. 40,000 whilst government hospitals will offer free mammograms during the entire phase of the campaign. 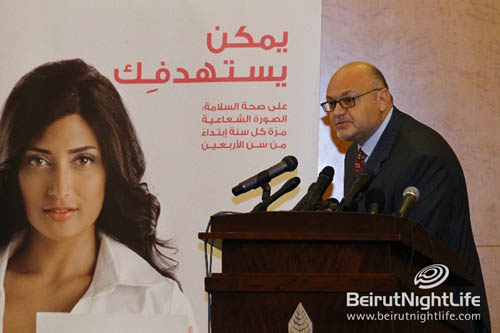 The First Lady of Lebanon, Mrs. Wafaa Sleiman declared: “This type of cancer is the most common among women, but it is not the most dangerous if detected early. It is our duty to warn the society, especially women, against the danger of this disease in view of fighting it and detecting it at its early stages; whereas early detection facilitates the treatment options and increases the chances of a cure. A joined effort is to be exerted with this respect: we ought to provide the society with all required and necessary facilities in order to make the tests and mammograms within the reach of everyone, by facilitating regular tests and reducing the financial burden for the citizens, and ensuring the necessary and advanced treatments to fight this disease.”

She added: “I would also like to shed the light on the importance of direct awareness campaigns towards the underprivileged categories, specifically in rural and poor areas where media campaigns might not reach and low-income women are many. We should not forget as well the female prisoners who have no access to the media. As such, these women need direct one-on-one communication using the traditional means, either through collective educational campaigns or through individual meetings, if need be.

Commenting on the campaign, Dr. Mohamad Jawad Khalifeh, Lebanese Minister of Public Health said: “Research has consistently demonstrated that early detection can greatly reduce complications, thereby giving women more treatment options and a greater chance at survival. The need to stress on continued and targeted education for future generations of women is highly essential to help save both lives and long term treatment costs.”

Hoffmann-La Roche Ltd. LEVANT Area Manager, Ammar Lutfi, praised the significant role this campaign is playing in terms of raising women’s awareness and knowledge of breast cancer, “over the past years, this campaign portrayed Roche’s mission to reach out to as many women as possible in order to spread the word and educate people about breast cancer. We are pleased to be able to team up once again with the Ministry of Public Health to encourage early screening for better prognosis of this life-threatening disease, because early detection can save lives.”

This year’s activities are once again taking place in association with medical societies, woman NGO’s, as well as cancer patient support groups, which also added major value to earlier campaigns. These activities include TV clip and radio spots that will be aired free of charge thanks to the continuous support of the Lebanese media for without we would have not reached so far.

The campaign will also be promoted through links on all leading Lebanese portals, online news sites, malls and supermarkets; again placed courtesy of all these companies. As part of increasing awareness, a dedicated hotline on 01-511 722 will be open throughout the campaign to answer basic questions related to the campaign, and guide callers to the nearest mammography center.

Know the Facts of Breast Cancer

Breast cancer is the second most common cancer in the world, and the most common cancer among women. There are 1.1 million new cases of female breast cancer each year worldwide. Breast cancer constitutes 41% of all cancer cases among women in Lebanon and 21% of all cancer cases. Five year survival rates are higher than 70% in most developed countries. New and more effective treatments are being developed all the time. Breast Cancer Incidence

The incidence of breast cancer in Lebanon is of 83 new cases per 100,000 women of all ages emerging annually. It is estimated that approximately 40% of all newly diagnosed breast cancer cases in Lebanon occur among women younger than 50 years of age. Breast cancer accounts for 548,000 deaths worldwide per year. The death rate from breast cancer in women has decreased since 1990.

Breast cancer usually shows as a lump or thickening in the breast tissue, although most breast lumps are not cancerous. A hard lump developing in the breast or armpit – typically painless and occurring on one side only. A change in the size or shape of the breast. Changes in the skin such as dimpling, puckering or redness. Changes in the nipple such as the secretion of an unusual discharge or a rash appearing around the nipple area.

The exact cause of breast cancer is not fully understood, although there are many factors which make developing the condition more likely, such as age and family history. Well established reproductive risk-factors such as menstrual cycle starting at an early age, low number of pregnancies leading to birth, late age at first pregnancy, late menopause and hormonal exposures e.g. some contraceptive medicines. The greatest risk factor for developing female breast cancer is ageing.1


The most common types of breast cancer begin either in the breast’s milk ducts (ductal carcinoma) or in the milk-producing glands (lobular carcinoma).
In situ (noninvasive) breast cancer refers to cancer in which the cells have remained within their place of origin – they have not spread to breast tissue around the duct or lobule. Invasive (infiltrating) breast cancers spread outside the membrane that lines a duct or lobule, invading the surrounding tissues. The cancer cells can then travel to other parts of your body, such as the lymph nodes. Unusual types of breast cancer include inflammatory breast cancer, phyllodes tumour, angiosarcoma, osteosarcoma, metaplastic breast cancer, adenoid cystic carcinoma and Paget’s disease of the breast. If the cancer is invasive it is assigned a grade on a 1 to 3 scale. The grade is based on how closely cells in the sample tissue resemble normal breast tissue under the microscope and helps determine treatment options.

– Grade 2 – the cells are somewhat abnormal.

– Grade 3 – the cells have lost their proper structure and function.

Knowing if a cancer has too many copies of the HER-2 gene also influences treatment decisions. This gene drives production of the growth-promoting HER-2 protein. About 1 out of every 5 breast cancers is HER-2 positive, meaning these cancers have greater than normal amounts of the HER-2 protein. These cancers tend to grow and spread more aggressively than do other cancers.

There is a lack of awareness among the public, as well as health professionals, that breast cancer can affect men, and treatment and management strategies are currently based on those used for women. Each female breast has 15-20 lobes with a number of lobules and ducts surrounded by fatty and supportive tissue. Each lobule has about 30 major ducts that open onto the nipple.

The darker area of skin around the nipple is called the areola. It has large glands around it which produce fluid to lubricate the nipple. The skin surrounding the breasts needs special care. It is thin. You should moisturize with a firming cream that stimulates collagen and elastin growth as well as UV protection (and retinol). This will help prevent wrinkling.

Nipples vary in size as well as shape. They can also point in different directions. A woman’s breasts are made up of fat, connective tissue, and thousands of tiny glands (known as lobules) which produce milk. Some people have an extra breast or pair of breasts (accessory breasts), or an extra nipple. Accessory breasts and extra nipples are unlikely to cause a problem and do not need to be removed.

Breast tissue begins to lose its firmness with age; the milk-producing tissue is replaced by fat, which makes the breasts sag.