World’s Most Expensive Cupcake for US$1,007 in Dubai 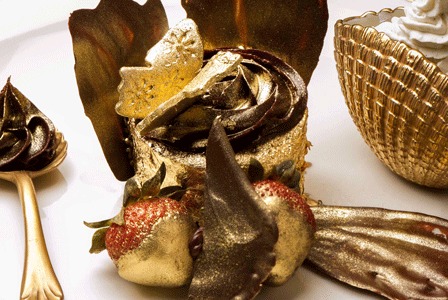 Made using 23-carat edible gold sheets, the Golden Phoenix went on sale on Thursday to celebrate the opening of the cupcake franchise Bloomsbury’s in the Dubai Mall. Other high-end ingredients include organic flour and butter, imported from the UK, Italian chocolate and vanilla beans from Uganda.

For added decadence, the costly cupcake is presented on a 24-carat gold stand, alongside a golden spoon, topped with chocolate icing, strawberries dipped in edible gold, and various other adornments.

“We are really excited to have unveiled the most expensive cupcake in the world,” said Vinay Lall, the general manager of Tablez Food Company, which owns the concept of Bloomsbury’s.

“We have seen people attempt expensive cupcakes before, however, those are not edible as they are incrusted with diamonds and other components.

“That is why we decided that we would take the realistic approach and present the most expensive edible cupcake in the world.”

The cupcake is available to order from the Dubai Mall’s Bloomsbury’s outlet. Each order is expected to take 48 hours to complete.