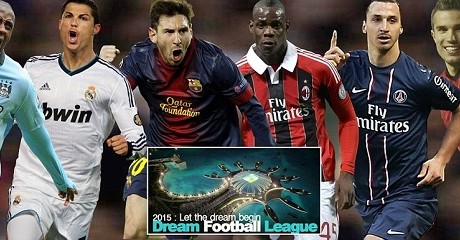 French website Cahiers du Football claims a spoof story it ran earlier this week is behind media reports about a ‘Dream Football League’ based in Qatar.

According to an exclusive report in The Times, Manchester United,Manchester City, Arsenal and Chelsea will each be offered £175 million by Qatari authorities to participate in sport’s richest tournament. The sums mentioned in the report would dwarf those available in the Champions League, which has an annual prize fund of £595 million. Chelsea won £47.3 million for winning last season’s competition.

The Times report has been the talk of football this morning, with the story trending on Twitter and the press offices at Uefa and the Premier League inundated by enquiries.

Many of the details were common to both stories. Both The Times and the spoof website claim the tournament will begin in 2015, and be staged every two years. It would be held in the summer at six cities across the Gulf. And both used the below image to illustrate their stories.