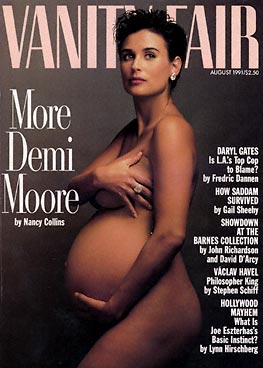 Pregnant Victoria Beckham is reportedly set to follow in the footsteps of Demi Moore by posing pregnant a magazine. In this case, we are talking about Vogue magazine. Vogue editor-in-chief Anna Wintour was said to be desperate to do the pic.

Moore famously posed nude for Vanity Fair while seven months pregnant, reports the Daily Star. And now Posh Spice is set to copy Moore with a naked photo-shoot for the cover of US Vogue. An insider said: “Knowing Victoria, she’ll do something completely unique.”The source told Star magazine: “There’s a real buzz going around about it.”

However, Victoria’s spokesman denied she was in secret talks with Vogue.

Emm what do you guys think?

Newer Post Valentine’s Diner At Vie Pianobar
Older PostHim Vs. Her: Are You Single Or Taken This V-Day?