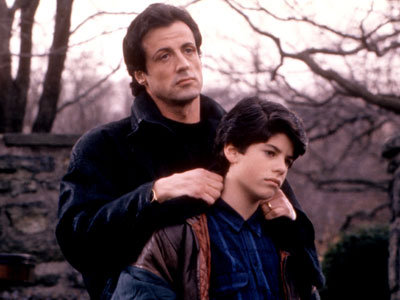 Sage Moonblood Stallone, the 36-year-old son of Sylvester Stallone who starred alongside his father in “Rocky V“, was found dead in his Hollywood apartment on Friday. The New York Post confirmed his passing with his attorney George Braunstein.  Sources tell The Post that he likely died of an overdose of pills, and that a representative of the LAPD stated, “There is no suspicion of foul play or criminal activity.”

Sage Stallone was Sylvester Stallone’s eldest son from his first marriage to Sasha Czack (they divorced in 1985).  Sage is survived by his brother Seargeoh, and his three half-sisters Sophia, Sistine, and Scarlet.

Sage made his film debut playing Robert Balboa, Rocky’s son, in 1990’s “Rocky V” when he was 14 years old.  The film was both a critical and financial disappointment, with Sylvester Stallone telling The Sun in 2010 that the reason he made the sequel was “I’m greedy — what can I tell you… It was a mistake because the audience didn’t want to see the downside of the character. They wanted him to remain on top.”

Sage also appeared with his father in 1996’s “Daylight,” but that year also saw him give up acting to be one of the co-founders of Grindhouse Releasing.  Along with his partner, Oscar-winning film editor Bob Murawski, Sage Stallone’s company restored and re-released forgotten exploitation films from the 1970s and ’80s. Grindhouse Releasing partnered with Quentin Tarantino to bring Lucio Fulci’s horror film “The Beyond” to screens in 2010.

Reportedly, Sage turned down the chance to reprise his role of Rocky’s son in 2006’s “Rocky Balboa” to focus on his burgeoning career and a director and producer.  The character was played in the sixth film by Milo Ventimiglia (TV’s “Heroes”).

Sylvester Stallone has not yet released a comment.  Just yesterday the elder Stallone appeared at Comic-Con International in San Diego, CA to promote his upcoming action film “The Expendables 2.”  Stallone was joined on stage by Arnold Schwarzenegger, who makes his first appearance since leaving the office as governor of California in the movie.