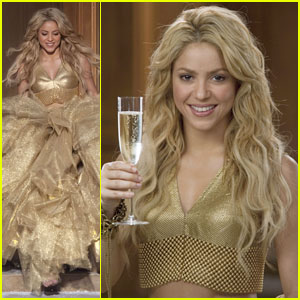 Colombian pop princess Shakira is donating the proceeds from a new commercial to her charity. The singer was asked to tape a Christmas television ad for a Spanish sparkling wine, and agreed only if Freixenet – the company behind the ad – paid her Pies Descalzos foundation $660,000. As part of the deal, the company will also produce a video for Shakira’s “Sale el sol” and make a documentary about her charity. The money will be used to build a school in Haiti and another in Colombia.

Also known as the Barefoot Foundation, Pies Descalzos is dedicated to improving education, nutrition, and the lives of the thousands of displaced children living in perilous conditions because of the violent internal conflict in Colombia.

“Education is a birthright and a quality education is the only tool that a child has to turns dreams into reality,” the 33-year-old said. “Since I was a girl I have been been aware of the tough reality faced by many children.”

Shakira has donated the harmonica she used in her “Gypsy” music video, and Juanes has gifted the jacket he wore at the Kick-Off concert for the 2010 FIFA World Cup.