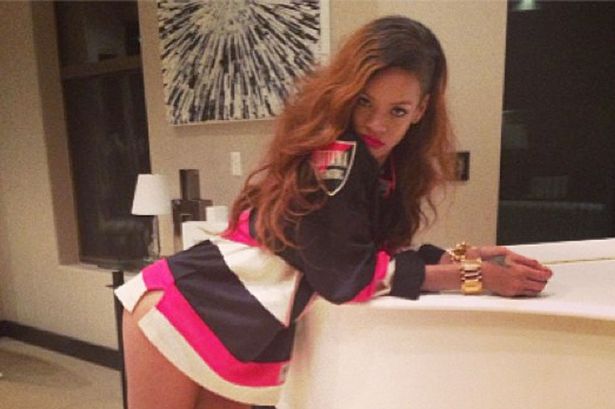 Katy Perry and Rihanna hadn’t been pictured together in months, but now they’ve had some saucy banter on Twitter.

It all started when the former Mrs Russell Brand saw pictures of the Bajan babe at a strip club and got a bit jealous.

Probably a bit like that time you saw on Facebook that two of your mates had gone on a night out without you. But with lots more dollar bills and tiny outfits involved.

Katy tweeted Rihanna to say: “Ermm… I was in LA Saturday night… Should I be proud or offended I wasn’t invited @rihanna #WHOISTHISDOPPLEGANGER”

The Bajan singer wrote back almost straight away (she’s efficient like that) to set Katy straight, tweeting:

Woah there. Our heads just exploded with that image.

And keep up Katy! Everyone knows Rihanna’s been in Miami from the constant instagram photos she’s been taking.

Never one to let someone else have the last word, Katy replied:

“Don’t worry @rihanna I’ll make it up to you at Barclays..”

Get a room, guys!

By the way, Barclays isn’t the bank (although if they wanted to do some S&M sex in your local branch we’re sure they’d be allowed) it’s the Barclay’s Center in LA.

Rihanna has a gig there in May for the Diamonds World Tour (which she kicked off in Atlanta by getting naked).

Although it’s lovely to see they’re mates again after speculation that Katy was annoyed about Rihanna getting back with Chris Brown .

Back in November, Katy was asked about Rihanna and said:

“I think she is doing fine. I don’t know. Her personal life has probably already been blown out of proportion. I don’t really have to go into that. I’m sure she probably want’s a break.”

Well she’s had that break and now she wants you to spank her, Katy.

Get your leather paddle out. Probably shaped like a cat or something.

Hopefully Rihanna can bring out Katy’s wild side again. She was a bit, um, nan-like at Coachella.

Here’s a little gallery of Katy and Rihanna’s friendship over the years.