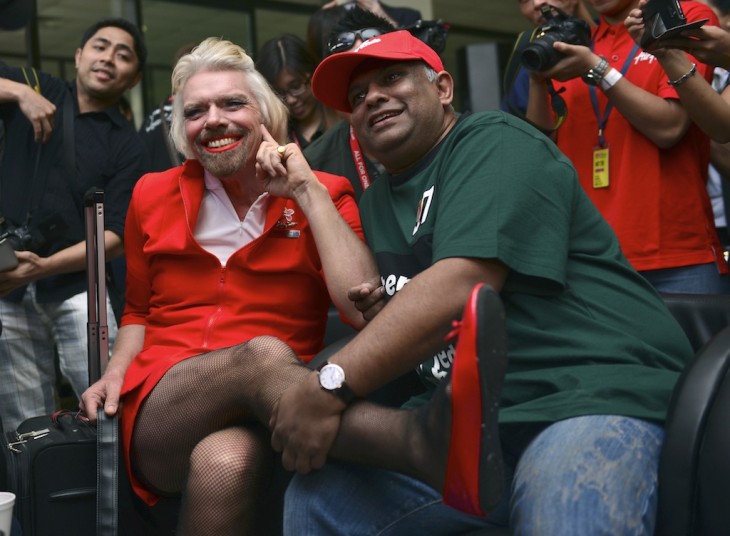 The Virgin Group founder had his legs shaved, put on lipstick and squeezed into a red skirt to honor a bet by serving as a flight attendant Sunday on an AirAsia trip from Perth, Australia, to Malaysia.

But he earned a reprimand from AirAsia chief Tony Fernandes after he deliberately dumped a tray of orange juice on Fernandes’ lap.

Branson lost a bet to Fernandes in 2010 after they wagered that their Formula One racing teams would finish ahead of each other. Fernandes’ team landed two spots above Branson’s.

Fernandes gleefully declared after Sunday’s nearly six-hour flight on his budget airline that Branson’s skills as an attendant were “rubbish” and that he was being immediately fired.

A cheerful Branson, who was tasked with pouring beverages, serving meals and making flight announcements, posed with Fernandes and popped champagne after stepping out of the plane at Malaysia’s main low-cost carrier terminal south of Kuala Lumpur.

He said in brief remarks that he was “glad to have gotten the bet over with and (was) looking forward to getting back into my clothes.”

“I always wanted to be an air hostess, but it looks like I have to get back to normality,” Branson said. The flight helped raise money for an Australian foundation for hospitalized children.

Asked how Branson rated as an attendant, Fernandes quipped, “Out of 10, maybe one, for a bit of humor.”

“I wanted to kill him actually” for spilling the juice, the Malaysian told reporters.

“He looked at me, I said, ‘don’t you dare,’ and the next thing I know, he tipped the whole tray on me,” Fernandes added. “He and the girls mopped it up, but I was walking around the flight in my underwear for a while because I didn’t bring another pair of trousers.”

Newer Post BeirutNightLife.com Brings You the Official Lebanese Top 20 the Week of May 12th, 2013
Older PostTV Baftas 2013: The full list of nominations & celebrity arrivals at the award ceremony