Oprah Finds Her Secret Half Sister 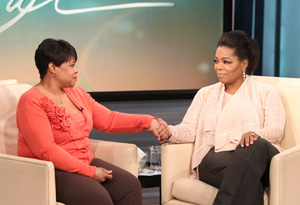 Yesterday we told you that Oprah was going to announce something big on her show… and she did. We follow up the news…

Oprah Winfrey revealed she has a secret half-sister, Patricia, and the two were reunited on her show! While it was a happy reunion for the sisters, Oprah says their mother Vernita Lee hasn’t “fully embraced” this miracle.

According to Oprah, her mother Vernita Lee gave her sister up for adoption shortly after she was born in 1963.

“There is no way a story like this wouldn’t get out in the press and wouldn’t get exploited,” Oprah told her audience. “It is true. I wanted you to hear it from me first.”

Her half-sister, Patricia, grew up in foster homes until she was seven and later learned she had three other siblings.

Patricia went through her adoption agency to identity her mother, but learned her birth mother did not want to meet her.

The Milwaukee woman then saw an interview on TV with Oprah’s mother in which she talked about two of her children who had died, which matched the detailed Patricia was given in her adoption records.

“I said, no,” Patricia recalled. “I said, that can’t be…We realized that Oprah could be my sister.” In 2007, Patricia got in contact with Oprah’s nieces who worked nearby and a DNA test came out positive. “Here’s how I was told,” Oprah said. “They say there’s something in the family you need to know about.”

“Finally I said to my assistant Libby, what is going on in this family? She says, ‘You have a sister.’ And I’m like, what? That is how I found out.

“I call my mother, literally confront my mother with this story,” Oprah recalled. “‘Is this true, is this true?’ She said, ‘Oh, yes.’” Oprah, with the support of Stedman Graham, then drove to Milwaukee to spend Thanksgiving with Patricia.

“It was a beloved moment, if you know what I mean,” she shared. “I’ll tell you what is so remarkable about you…it’s gonna make me cry, so be patient.