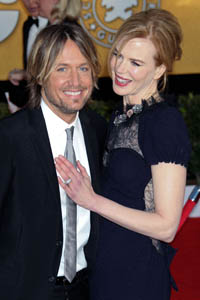 Nicole Kidman shocked the world when she announced she and husband Keith Urban had a baby via a gestational carrier. The couple successfully kept the news so quiet that the press never got so much as a little whiff of the news. Now Nicole is talking about why it was such a big secret.

The Rabbit Hole star chatted about it with Giuliana Rancic on the red carpet at the SAG Awards.

“I wanted to be able to tell everybody because I was so excited about her,” Kidman said.

“We just decided this was our thing together,” the 43-year-old mom said of Urban. “It kind of just perpetuated itself.”

“…It protects her,” Kidman added, “and it protects everyone in the situation.”

The Aussie actress announced her new addition recently when little Faith Margaret was just three weeks old. She has another daughter with Urban, two-year-old Sunday Rose, and teens Isabella and Connor with ex-husband Tom Cruise.