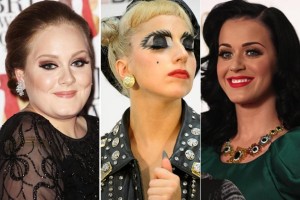 MTV announced the nominees for the “2011 MTV EMA” with Lady Gaga leading the pack with six nods, and Katy Perry and Bruno Mars following closely behind with four nominations. British songstress Adele, who stands as the top selling artist of the year, has been nominated for three awards, with Justin Bieber and Thirty Seconds To Mars also up for three. The 18th annual MTV EMA will broadcast live on Sunday, 6th November at 9PM CET from Belfast’s Odyssey Arena on MTV channels around the world.

The “2011 MTV EMA” are sponsored by Dell, Replay, Hyundai and Swatch.

singer/songwriter Bruno Mars is up for four awards, including Best New, Best Male, Best Push and Best Song for “Grenade.” Adele has been nominated for Best Female, as well as Best Song and Best Video for “Rolling In The Deep”, and Justin Bieber will compete for Best Pop, Best Male and Biggest Fans. Thirty Seconds To Mars is up for Best Alternative, Best World Stage and Biggest Fans.  As always, the MTV EMA – MTV’s international celebration of the year’s best in music – features nominees from across genres, recognizing today’s hottest acts and global superstars. Foo Fighters, Snoop Dogg, My Chemical Romance, Jennifer Lopez, LMFAO, Jessie J, Beyoncé, Coldplay, Eminem, Arcade Fire, Red Hot Chili Peppers, Far East Movement, Kanye West, Linkin Park, Wiz Khalifa and Kings of Leon are each up for two EMA nominations. New to the “2011 MTV EMA” is the Biggest Fans award, which will go to the most passionate fan base for a particular artist. Starting now, viewers can vote for their favorite EMA artists by visiting www.mtvema.com. The more fans engage with the EMA content featured on the site, the more their participation and points can boost the chances for their favorite artist to win.