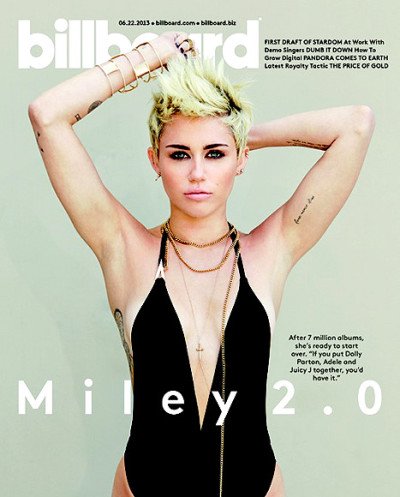 But the young singer says folks have gotten the wrong impression from her makeover, telling the latest issue of Billboard:

“A lot of people wanted to try to make me the white Nicki Minaj. That’s not what I’m trying to do. I love ‘hood’ music, but my talent is as a singer.”

And the Twerking aficionado also drives home a point in the interview that she’s been making for years: don’t even attempt to tame her!

“I can’t really be told what to do right now,” Miley says. “I’m too young to go in and make someone else’s vision come to life. I want to go make my visions.

Cyrus has made news over the past few months for partying and dancing and smoking and flirting with Justin Bieber… but she doesn’t want anyone to think her personal life comes at the expense her professional life.

“I never stop working, ever,” she says. “I want my record to be the biggest record in the world, and I’ve given everything to get here, even down to friends and family and relationships – I’ve just put this music first.”

The album will be released later this year and Miley teased that it may surprise some long-time fans:

“I’ve always wanted country-rock influences, but now I’m moving over to a more urban side. It’s not a hip-hop album, though – it’s a pop album. I’m not coming in trying to rap. It’s more like, ‘I don’t see any girls out there doing what Miguel and Frank Ocean are doing.'”

For even more from Miley,’ pick up the latest issue of Billboard. It goes on sale Monday, June 17.

Newer Post Exclusive interview with Omega President from BaselWorld 2013- Part 1
Older PostDJs of Lebanon: London and Beyond with Nicole Moudaber