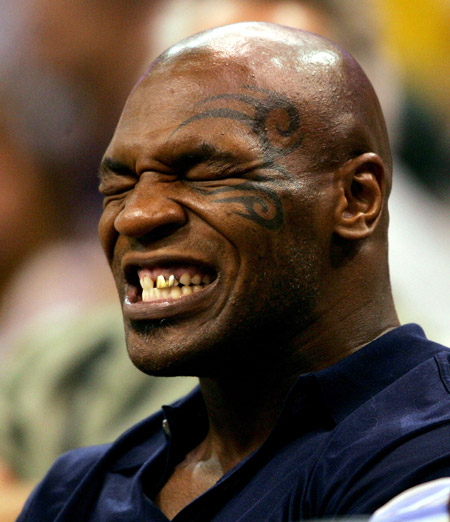 Mike Tyson is being forced to go another round in a fight he thought was already won. A paparazzo who was arrested along with the former heavyweight champ last year after a dustup at Los Angeles International Airport is now suing Tyson for more than $36 million, claiming he suffered a brain injury from the beating he took.

Tyson, who is in talks to play his tiger-loving self again in Hangover 2, never faced criminal charges in the matter after city prosecutors determined there wasn’t enough evidence to make a case.

So what’s in store for round two?

In the lawsuit filed today in L.A. Superior Court, Antonio Echevarria claims that a Tyson left hook caused “abrasions and lacerations,” as well as a “closed brain injury” and damage to his cervical spinal cord region.

As for having been arrested along with Tyson, Echevarria claims that the retired fighter and two airport employees made false statements that resulted in him sharing the bust.

Tyson claimed at the time that Echevarria had trailed him and his family through several terminals while they hunted down lost luggage after a flight from London and that he was only trying to defend himself when the shutterbug got in his face.

Echevarria was treated at a nearby hospital after the incident, a point he reiterates in his lawsuit.

“Plaintiff was severely hurt in his health, strength and activity, sustaining severe injuries to his face, brain, spine, neck and other parts of their body,” the complaint reads. “All of the aforementioned injuries have caused, continue to cause, and will in the future cause Plaintiff great physical and emotional pain and suffering as well as neurological and cognitive problems.”

According to a statement of damages obtained by TMZ, he wants $25 million in punitive damages, as well as $10 million for pain, suffering, inconvenience and emotional distress; $50,000 for medical expenses to date and $250,000 for future medical care; $750,000 for loss of future earning capacity; and $10,000 for property damage.

At least he didn’t ask for one of Tyson’s tigers….