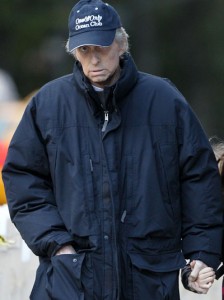 Actor Michael Douglas has said he believes he has beaten throat cancer after revealing his tumor has gone. In his first television interview since ending his treatment, the star said he felt relieved after a “wild, six-month ride”.
Douglas – who is married to actress Catherine Zeta-Jones – announced he had been diagnosed with the disease in August.
He underwent chemotherapy and radiation but in a taped interview with NBC’s Today show, he said: “I feel good, relieved. The tumor is gone.
“But I have to check out on a monthly basis now to maintain. I guess there’s not a total euphoria,” he added.
“I think the odds are, with the tumor gone and what I know about this particular type of cancer, that I’ve got it beat.”

He said he has lost 14.5kg but had managed to put 5.5kg back on after “eating like a pig”.
In the interview, he revealed one of the effects of the tumor and treatment was that his salivary glands have been closed down for a year or two, leaving him with a very dry mouth.
The 66-year-old said suffering from cancer has made him think more about the life he leads and spending time with his two children, Dylan, 10 and Carys, 7.