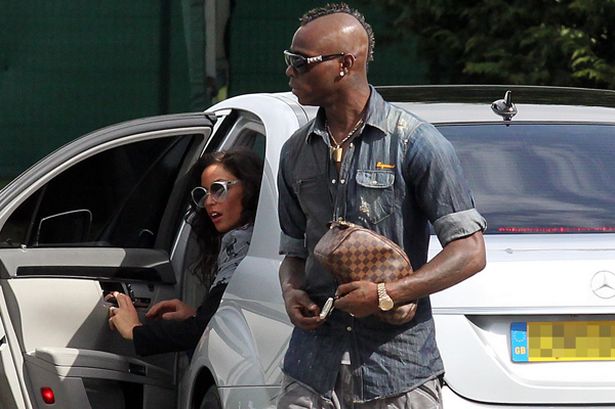 Raffaella, 27, revealed earlier this week that she was expecting the fiery 21-year-old Manchester City striker’s baby and that she was almost four months pregnant.

The couple split in April after a huge doorstep row and earlier reports this week said Balotelli was ”delighted” at the news .

But today he said in statement that he would only ”accept full responsibility” for the baby after a DNA test proved he was the father.

He said: “A few days ago I learnt from third parties that Raffaella was pregnant. So I decided to contact her and it was only after I had questioned her that she confirmed it was true.

“I am very disappointed as I don’t think it is right that I should learn this after four months.

”I will accept full responsibility after a paternity test. I don’t really want to speak publicly about my private life but I find that I have to explain once and for all, the nature of my relationship with Raffaella Fico

“We split up in April and since then we have not seen or spoken to each other.

“Raffaella knew then and she knows now, that I have no intention of getting back together with her.

“Out of respect for her I have never spoken about our relationship, even when things have been said that are not true.

“I believe that Raffaella is already famous enough without having to exploit this story for publicity.”

He continued: “This is the last time I am going to speak about this and I have no intention of responding or replying to anything Raffaella writes or says.”

Tv showgirl Raffaella had claimed that the two were going to give their relationship another chance but the strength of furious Balotelli’s statement appeared to tell a different story.

The Italy striker’s demands for a DNA test were slammed by his former girlfriend’s brother – who also revealed she had received threats demanding she had an abortion.

Today Francesco Fico stormed: “Balotelli’s request for a paternity test is shameful and people who are close to him have also telephoned my sister and told her to have an abortion.

“To learn that Balotelli wants a DNA test is offensive and shows a total lack of respect towards my sister. Raffaella is very stressed out about all this and she is in a bad way. If I had Balotelli in front of me I would tell him ’Grow up and take responsibility for being a father.’

He added: “I am not asking him to get back together with Raffaella – my mother and I were never happy about the relationship. Now enough is enough and I am calling for some respect towards a young woman who is pregnant.”

Raffaella had claimed that she told Balotelli she was pregnant late last month, the day before Italy beat Germany 2-0 in the European Championships semi-final and that he had replied ’You have given me the best news in the world.’

Balotelli is due to report back to Manchester later this month for pre-season training and is now on holiday in Italy where he has been spotted visiting his adopted parents.

Today Raffaella’s agent Pasquale Arria said:”She is aware of what Mario has said and is thinking about the best way to respond. Her brother Francesco said it all though when he said it was disgraceful for Mario to ask for a paternity test.”