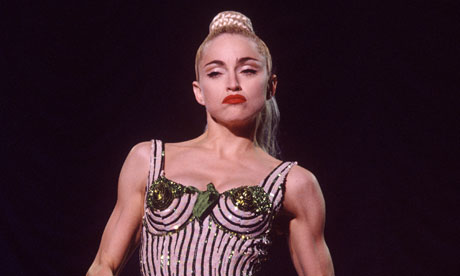 Madonna’s iconic conical bra was sold for 32,450 dollars, more than double the pre-sale estimate of 15,000 pounds, at an auction in south-west London.

The green silk costume – designed by Jean-Paul Gaultier – sparked a bidding war at the Christie’s sale, a leading daily has reported.

The pop diva wore the outrageous dress to perform three songs, including her hit ‘Hanky Panky,’ on her 1990 ‘Blond Ambition’ tour, the paper said.

A black Lycra two-piece that she wore to sing ‘Vogue’ was sold for 16,250 pounds. The highest price raised at the pop culture sale was 43,250 pounds paid for a 1947 painting of American actress Ava Gardner.