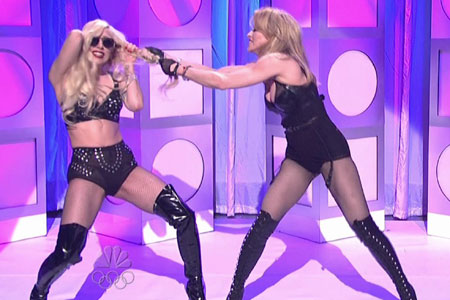 From the moment Lady Gaga began climbing the ladder of fame, she gave credit to Madonna for being one of the best in the music industry and her very own musical idol. She has always inspired from Madonna – whether it’s in her choice of outfits, songs, video clips or shock factor.

This may have gone a little overboard with the release of her latest album Born This Way, which was clearly copying Madonna’s style. It was so similar to the extent that the first single on the album, “Born This Way” was heavily compared to Madonna’s “Express Yourself.” Madonna fans weren’t too happy about this and labeled Gaga as a “copycat” and the song as a “rip-off.” That same week, Madonna featured the “Express Yourself” video on her Youtube channel. Fans of both artists couldn’t help but wonder if that was purely accidental or intentional. We doubt Madge wouldn’t have intended this . . .

Another incident that made us all wonder about the cattiness between Lady G and Madge, happened last Friday when Madonna was rehearsing for a concert in Tel Aviv. Madonna began singing “Express Yourself” and transitioned into Lady Gaga’s “Born This Way.” Madonna was clearly not paying tribute to Gaga by singing it, since she called it “reductive” and a “rip-off” of her previous work. Gaga responded by calling Madonna’s comments “retarded.”

Do you think Gaga will replace Queen Madge as Queen? Is Madonna feeling intimidated because she senses strong competition or can the original never be replaced?