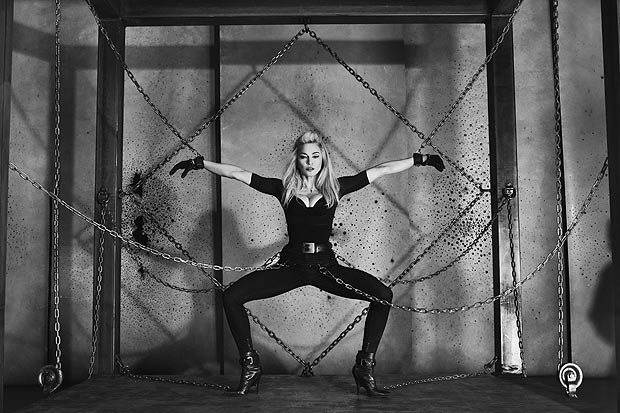 MADONNA is clearly hoping to get a chain reaction with this kinky image.

The 54-year-old megastar wears a low cut top and high leather boots and squats with her arms and legs shackled by chains in the picture.

The shot is to promote the DVD for last year’s MDNA tour, which saw Madge perform 88 gigs in seven months.

As usual the singer managed to cause controversy, flashing her boob while on stage in Turkey.

And another moment which might not make the DVD is when she fell on her face during Like A Prayer in Dallas.

Madonna told the New York Post that she had been exhausted by the epic tour, saying: “I was a mess.

“I would have my bad nights, and I would cry and I would say I don’t want to do this, and 49 per cent of the time I was crying, usually from overexhaustion.

“But there’s something about pushing yourself.”