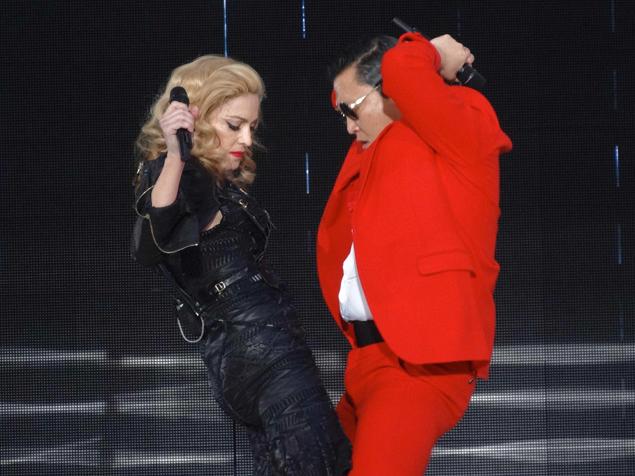 Korean pop singer Psy joined musical icon Madonna onstage during the New York City stop of her MDNA tour and gave a surprised audience a show to remember when the pair performed his now-infamous “Gangnam Style” dance together onstage.

The dynamic duo then sang and danced to her 2000 hit “Music” as the crowd went wild.

“He flew in all the way from Frankfurt, Germany this morning just to cheer your a–es up!” the 54-year-old Material Girl said by way of introducing the singer. “Thank you, Psy! I’m a very big fan of yours. I’ve never been out to Korea, but I’ll have to do it one day.”

Psy, in a bright red suit and his signature shades, took the mic himself and roused the crowd with his response.

Madonna and Psy showed off their dance moves onstage at Madison Square Garden.

“That’s so sweet,” the 34-year-old performer grinned. “I have to say this: In the last couple of months I’ve experienced so many things, but now I’m at MSG with Madonna!”

Madonna has also been doing a bit of unconventional fundraising for Hurricane Sandy during her shows, requesting money to help with relief efforts during a risque performance of her classic hit “Like a Virgin.”

During Tuesday’s show, the singer said she raked in $3,000 during her performance the previous night as fans tossed cash onstage.