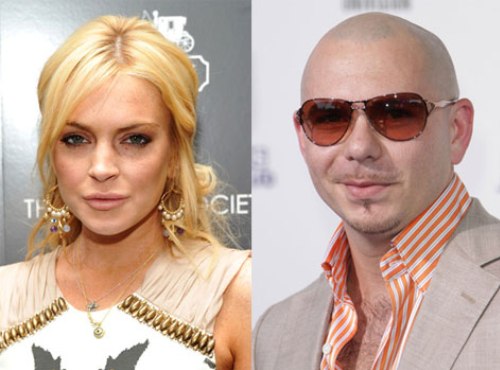 Pitbull, along with Ne-Yo and Afrojack, are being sued by Lindsay Lohan because her name was mentioned in the song “Give Me Everything.” She claims that the lyrics “I got it locked up like Lindsay Lohan” caused her “irreparable harm.”

Pitbull responded to the lawsuit by saying that since Ryan Seacrest didn’t sue him for mentioning his name in a song, neither should Lindsay. Also, Pitbull performed that song as part of a New Year’s Eve show special, hosted by Seacrest himself.

Pitbull also resorted to the First Amendment (freedom of speech). The judge has not announced the verdict yet.

It seems Lindsay should get some of Seacrest’s sense of humor. One can’t help but wonder why Lindsay just noticed this now. “Give Me Everything” was one of the biggest hits of 2011 and has been out since last summer! Maybe she’s trying to get her name in the headlines since Pitbull is hot at the moment and she’s not.Maybe she’s bored or maybe she is trying to find easy ways to make a buck since she flushed her career down the toilet.

It’s also quite ironic that Lindsay is now worried about her image after all the bad publicity she brought unto herself with her substance abuse, getting thrown in jail and getting admitted to rehab.

Are you team Pitbull or team Lindsay on this one?