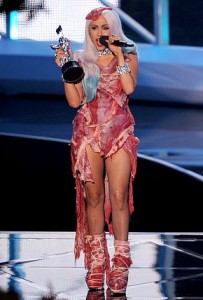 Raw-raw-ah-ah-ah! When Lady Gaga accepted her award for Video of the Year at the VMAs Sunday, the “Bad Romance” singer turned heads with her meaty ensemble. She went into the night with 13 nominations, took home top honors. Lady Gaga never seizes to amaze her audience and fans with her eccentric out fits, this time she did it with a blast.

When Cher presented the award to Lady Gaga, she handed her her “meat purse”. She remarked, “I never thought I’d be asking Cher to hold my meat purse.” Next, all the people realized what her entire get-up (dress, hat, shoes, and purse) was actually made of. She also announced there that her third album will be titled “Born This Way”.

Has Lady Gaga outdone herself? Do you guys know which cut of meat she used? It seems some inexpensive flank steaks.