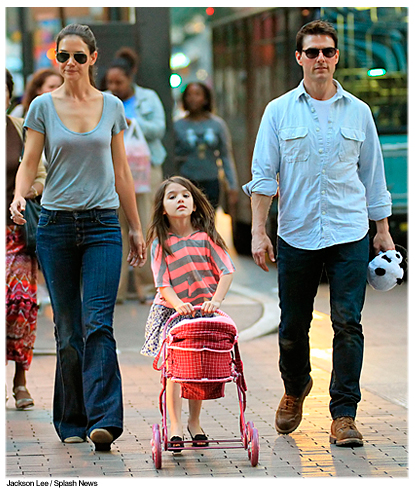 Updates in the Katie Holmes vs. Tom Cruise divorce case have taken over the headlines.

Contrary to what sources and the general public speculated, Scientology was not the reason behind the divorce – but certain sources still stress that it is indeed one of the main causes for the split.

According to Katie, Tom treated her like a robot and controlled her every move. He put a tight hold on her career, calling the shots on what she can and can’t do. For example, while filming Thank You for Smoking back in 2005, Tom instructed the producers to eliminate all kissing scenes between Katie and Aaron Eckhart for the promotional photos.

Similarly, while filming Batman Begins, Tom didn’t allow Katie to fly with the rest of the cast, insisting that she use his private jet instead. One source says that Morgan Freeman was “disgusted” by the situation while another source close to Tom sarcastically says, “Wow, Tom offered her his private jet. How terrible for Katie.”

Morgan Freeman hasn’t made a statement regarding his comment yet.

So far, Tom is unable to reach his daughter Suri, and according to sources, he’s feeling very betrayed and thinks that Katie is using Suri as a weapon. Tom’s lawyers won’t be too happy about this.

Inversely, Katie claims that people from Scientology aren’t too happy with her decision and have been secretly following her around. People who have photographed Katie many times claim that there have been “mysterious men” and vehicles around her apartment that also follow her when she’s out. There’s no proof regarding this allegation, but if it’s true, this could help Katie a lot in the custody battle.

Negotiations for settlement are still underway, but Tom insists on not reaching an agreement unless he’s granted equal custody rights to his daughter. The determining factor in this battle is Suri, and this entire negotiation process could fall apart at any moment.