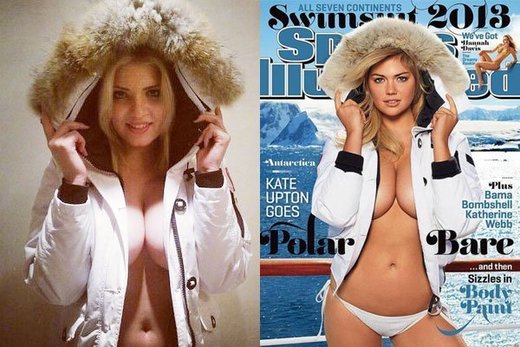 A 22-year-old Russian student named Ania tweeted a photo of herself posing like Kate Upton on the 2013Sports Illustrated swimsuit issue cover this week.

Kate Upton herself re-tweeted the picture, it went viral.

Ania, who calls herself a “Mail order bride in training” in her Twitter profile, then made her tweets private to stave off the onslaught of attention.

So who is she? By and large, Ania remains a mystery.

In an interview with SI that she agreed to give under the condition that her last name not be used, she said the mail order bride thing was “a total joke.”

“I’m getting a lot of marriage proposals,” she added.

“I’ve been told I look like [Upton] in the past, but when SI came out and she was wearing the same jacket that is hanging in my closet, I knew it had to be done.”

Indeed. It really had to be. Well done, Ania.