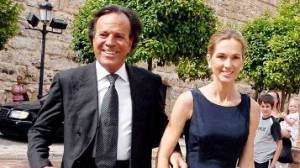 Heart-throb Spanish singer Julio Iglesias, 66, has tied the knot with his longtime partner, a Dutch model named Miranda Rijnsbugerm 44. The two exchanged vowels in a secretive ceremony in the Virgen del Carmen church in the southern jet-set resort of Marbella. The couple have been together for over two decades. According to sources, two witnesses and the couple’s five children, the youngest born in 2007, attended their parents wedding.  This is Iglesias second marriage. He has three children (including singer Enrique Iglesias) with his first wife Isabel Preysler. It was reported that none of his three children attended the wedding.