Jennifer Lawrence takes a tumble in the Oscars 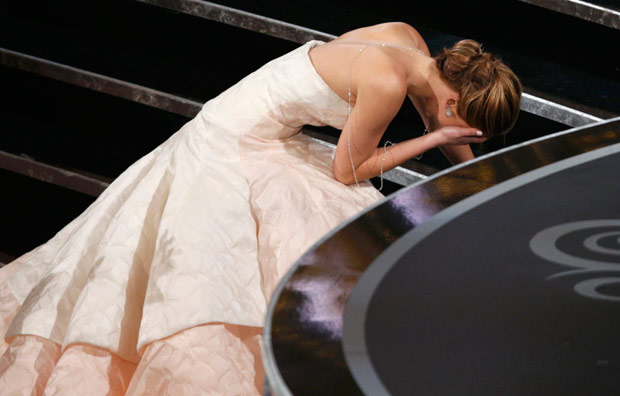 JENNIFER Lawrence falls up the stairs in front of hundreds of her peers — but the Silver Lining is, she’s just won the Best Actress Oscar.

The 22-year-old tripped on the hem of her frothy white gown as she went up to collect the award for Silver Linings Playbook.

Keen to see the funny side, the actress quipped as the audience gave her a standing ovation: “Are you standing up because you are so embarrassed that I fell?”

Only two weeks before the actress was left red-faced after losing her skirt at the Screen Actors Guild Awards.

As she stood up to collect her award for Best Actress the skirt of her Christian Dior gown had ripped clean off, revealing a dangerous amount of her thighs exposed.

Jennifer Lawrence wasn’t the only star embarrassing herself at last night’s bash.