It is WAR: Angelina Jolie VS Jennifer 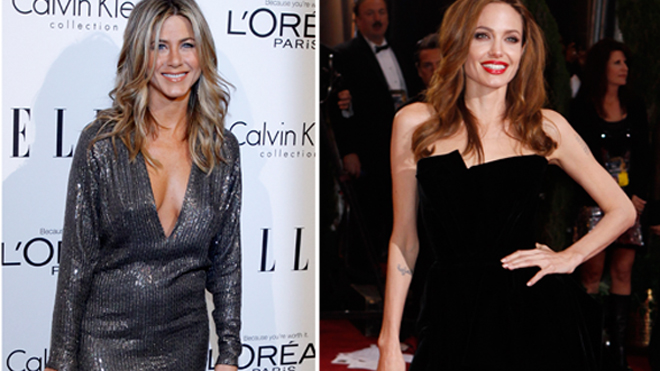 Will Married Life Curb the Media’s Aniston Versus Jolie War?

Are you Team Aniston or Team Jolie? Well, it may not matter for much longer either way.

With Jennifer Aniston and Angelina Jolie’s upcoming weddings, some speculate the Brad Pitt love triangle hype, which has been a tabloid target since way back in 2004, is finally ending.

“I think the days where we see t-shirts that say ‘Team Jen’ and ‘Team Angie’ are coming to a close,” Entertainment expert Valerie Greenberg told FOX411’s Pop Tarts column. “It is evident that Jennifer is head-over-heels in love and that is where her focus is, and Angelina is so busy with her children, career… There is no way either of them is still competing.”

The Aniston versus Jolie war was sparked from the moment Brad Pitt and Angelina Jolie stepped on-set to film “Mr. and Mrs. Smith,” and it only intensified when Pitt and Aniston filed for divorce the following year. Despite vehement denials from both camps about romantic relations between Jolie and Pitt, a few months later the genetically blessed stars were photographed together on an island in Kenya.

And for the last eight years, entertainment news outlets have ceaselessly devoted headline after headline to the alleged “war” between the two Hollywood leading ladies. From claims of confrontations, to unfounded tales that “Brad Wants Jen Back” to articles that the two are always trying to one-up the other –Aniston being “Pitted” against Jolie is almost as American as apple pie.

But until the respective weddings are both done and dusted, expect contrasts and comparisons to hit a high point, celebrity journalist Jennifer Birn explained.

“The weddings will bring them back to the covers of the magazines for a bit. After both being unmarried for so long, the fact that they’re now planning weddings within months of one another is bound to bring about an abundance of stories comparing the weddings and subsequently placing them against one another in every other way as well,” Birn said “The press will scrutinize the weddings and compare them, which should be simple because I hear Angelina and Brad are prepping for an extravagant affair, while Jen [and fiancé Justin Theroux are] planning a more simple ceremony.”

And then there’s the Honeymoon period. Expect the bloodshed to die down – if only a little.

“It won’t go away completely,” Birn anticipated. “It could come back if [or] when Jen gets pregnant and ‘finally’ gets her baby.”

Yet there are still some from the school of thought that the A-list love war will always and forever be perfect gossip for the blogs and weeklies. Hollywood life management expert Kimberly Friedmutter said she expect the two will always be compared.

“More than likely, their funerals will be compared as well. Let’s not forget the Liz Taylor/Debbie Reynolds marital scandal [in which Taylor wound up stealing her hubby Eddie Fisher] and ensuing competition,” Friedmutter said. “Liz was Angelina and Debbie was Jen. The media war will continue because each step of their life progression will be compared. This is tolerable for adults, but will carry over to their children too. And this will always be a topic, because women all over the world endure losing lovers and husband’s to other women.”

But what continues to drive the intense scrutiny of the two actresses?

“Silence. Jen stayed quiet, Angie stayed quiet, and Brad stayed quiet. Neither went on a rampage against the other,” Friedmutter added. “Silence is golden. This ongoing fascination has made each couple more valuable.”