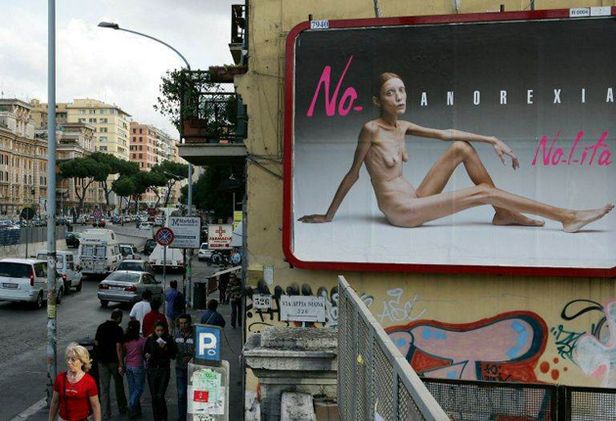 Isabelle Caro, a French model who became a symbol of the fight against anorexia when she was photographed naked for a controversial advertising campaign, has died at the age of 28. Caro rose to global prominence three years ago when posters featuring her emaciated body were displayed around Milan on the eve of fashion week, sending shockwaves through an industry criticised in some quarters for failing to tackle eating disorders among its models.

The posters were banned by the Italian advertising watchdog but the images went viral online, sparking a debate just months after the deaths of two prominent Latin American models. Caro, who had struggled with anorexia since she was 13, chose to battle her demons in public in a bid to warn women away from the disease. She appeared on talk shows and wrote a blog and then a book titled The Little Girl Who Didn’t Want to Get Fat.

She died on 17 November after returning to France from a job in Tokyo but news of her death was kept secret until now.

The exact cause of death is not known but she was treated in hospital for a fortnight with an acute respiratory disease after returning from Japan. Her family held a private funeral in Paris. Referring to Caro’s anorexia, Daniele Dubreuil-Prevot, her long-time acting instructor, said the French model “had been sick for a long time”.