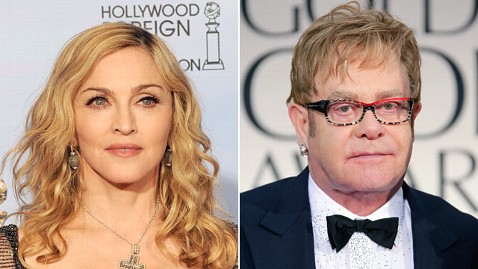 The war between the two queens, Madonna and Sir Elton John, is on full throttle! For those of you who didn’t know, the quarrel began in February when Elton wished Madonna luck with “lip-syncing” her Super Bowl performance. The dispute escalated when they were both nominated for the same category during the Golden Globes. It’s all been quite passive until now though, when Sir Elton responded to Madonna’s not-so-nice comments towards his dear friend Lady Gaga.

“Why is she such a nightmare? Sorry, her career is over. Her tour has been a disaster and it couldn’t happen to a bigger c**t,” said Elton to an Australian reporter.

“If Madonna had any common sense she would have made a record like Ray Of Light and stayed away from the dance stuff and just been a great pop singer and make great pop records, which she does brilliantly. But no, she had to go and prove… she looks like a f*cking fairground stripper. She’s been horrible to Gaga,” he continued.