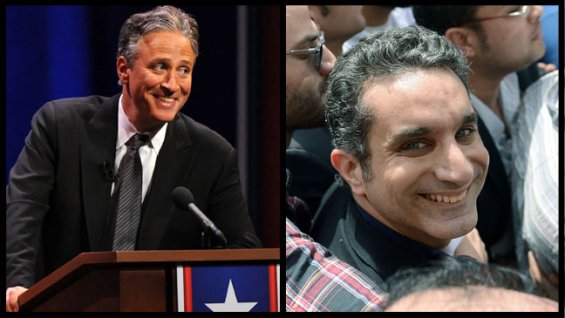 The Egyptian government has issued an arrest warrant for American comedian Jon Stewart, accusing him of blasphemy and fomenting “anti-Egyptian” sentiment.

The charges come just two days after Stewart used The Daily Show to blast Egyptian president Mohammed Morsi over his harassment of Bassem Youssef, an Egyptian satirist critical of his government.

Youssef is the host of the wildly popular El Bernameg (The Program), a satirical news program inspired by Stewart’s The Daily Show. He has been questioned by police in recent days, and the government has threatened to revoke the licence of the television station at which he works.

According to a statement issued by Minister of Justice Ahmed Mekki, Stewart will also be charged with “contributing to the delinquency of an Egyptian” for his role in inspiring Youssef to challenge the Islamist regime.

Mekki claims that since clips form The Daily Show are rebroadcast in Egypt on CNN’s international channel, Stewart is open to prosecution under Egyptian law.

“Mr. Stewart has 30 days to surrender to Egyptian authorities in Cairo,” the statement reads. “If he does not comply he will be tried in absentia and we will seek his extradition from the American government.

“This conspiracy to defame the Egyptian government violates our laws and will be prosecuted fully. Mr. Stewart may think he’s funny. But in reality he is destroying the moral fiber of Egypt with his numerous references to penises and openly flamboyant homosexuals like Larry Craig, Marcus Bachmann, and Lindsey Graham.”

Some have reacted with surprise that Egypt is investing precious time and energy into pursuing a legal case against a foreign comedian. Faced with a collapsing economy, a constitutional crisis, and an epidemic of sexual assaults, the government’s resources could perhaps be better used.

However, in an exclusive interview, Mekki said there is nothing more important than defending Egypt’s honor against the United States’ most prominent political comedian.

“We’re making this our top priority,” he  said. “We’re taking prosecutors off of sexual harassment and domestic violence cases and reassigning them to Stewart. These jokes simply cannot go unpunished.

“We’re also planning to get The Moment of Zen segment removed from the Egyptian broadcast immediately. We can’t have Buddhist fifth infiltrating our Islamic republic.”

According to legal experts, Egypt’s action against Stewart will have little effect as the American government is unlikely to extradite him.

“Egypt is a sovereign country,” explains one prominent international lawyer. “They can do whatever they want. But their warrants have no validity in the United States.

“All this would do is stop Stewart form visiting Egypt. So I guess no pyramids for him.”