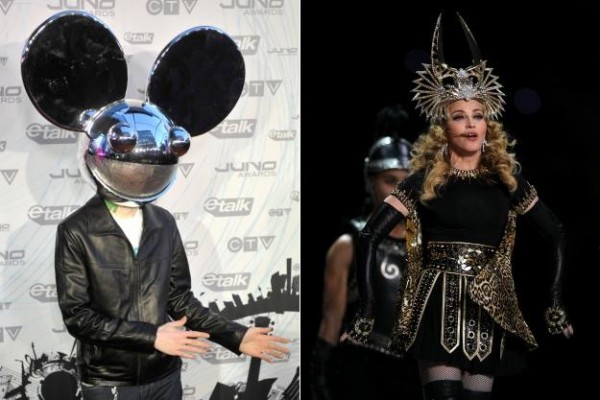 Madonna is being attacked by Deadmau5, one of the most famous DJs in the world, because he’s really angry at how Madge made the use of ecstasy sound appealing during a recent concert.

DJ DeadMau5 was watching when Madonna went on stage at the Ultra Music Festival in Miami this weekend as she shouted out, “How many people in this crowd have seen molly?” (See video above at 0:45 seconds)

For those of you who didn’t know, “Molly” is slang for MDMA, a key ingredient in ecstacy.

While the crowd was cheering for the Material Girl, Deadmau5 updated his Facebook page with the following:

“Very classy there madonna. ‘HUR DUR HAS ANYONE SEEN MOLLY???’ such a great message for the young music lovers at ultra.”

He continued, “Quite the f’n philanthropist. but hey, at least yer HIP AND TRENDY! f*cking cant smack my head hard enough right now.”

Madonna tried to make amends with Deadmau5 on Twitter yesterday after he tweeted to her:

“You’re a role model to 100’s of millions. You have a powerful voice, EDM could use your positive influence, not ‘molly’ talk.”

She responded by tweeting an old photo of herself wearing Mickey Mouse ears with the caption:

“From one mouse to another, I don’t support drug use and I never have. I was referring to the song called Have You Seen Molly written by my friend Cedric Gervais who I almost worked with on my album.”

“Fair enough, i was just voicing my concerns as i usually do. +1 respect for clearing it up personally.”

What do you think Madonna was really referring to when she said “Molly”?