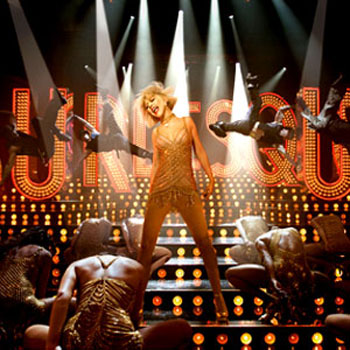 Kristen Bell’s upcoming movie with Christina Aguilera and Cher may be called Burlesque, but they want everyone to stop expecting a lot of nakedness on the big screen.

“There’s lot of sexiness and I show a lot of skin but there is no nudity,” Bell told us at last night’s premiere of her new comedy, You Again. “The funny thing about this burlesque in the movie is they sort of reinvented it in a way that Europe already knows it. Americans kind of associate burlesque with stripping, which is not what it is at all. Burlesque is actually sort of a funny, wonderful, playful tease.

“The movie will be PG-13 and there will be sensual things about it but it won’t be just tits and ass,” she said.

But there will be a whole lotta girl-on-girl…bitchiness.

“It gets pretty catty,” Bell says in describing her and Xtina’s competing burlesque dancer characters. “It gets pretty bad, which is a lot of fun. Those girl rivalries are always so much fun to play, especially when you actually like the other person. She’s lovely so it was always a struggle to keep a straight face, but it’s fun to be the bitch.”

And fun to work with Cher. Asked what that was like and Bell just smiled, “F–king amazing!”

That’s not all we have for you from last night’s premiere. Make sure to come back here later on to get scoopage on Bell’s You Again costars Betty White (is she really covered in tattoos?), Jamie Lee Curtis’ take on the upcoming True Lies television series and so much more.