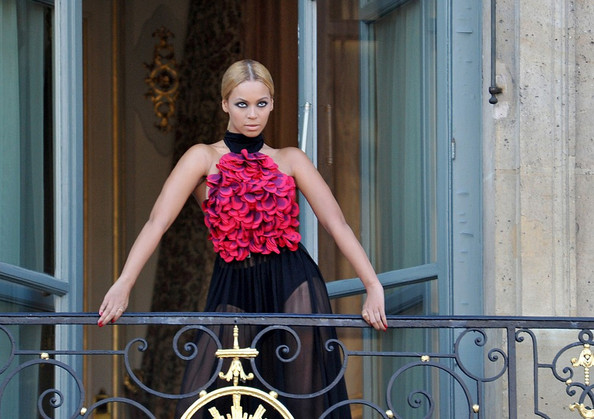 The beautiful Beyoncé Knowles delighted her Parisian fans as she worked her most dramatic poses from the balcony of a Hotel Ritz suite.

Knowles, whose upcoming single “Girls (Who Run This World)” leaked this week, was reportedly shooting for an upcoming issue of Harper’s Bazaar. Clad in an intricate red and black gown with a saucy see-through skirt, the international superstar happily smiled and waved at fans who congregated beneath her display.

Knowles is expected to wear oodles of designer finery in the video for her new single, which samples Major Lazer’s “Pon de Floor.” Initial reactions to the song have been mixed: Most people are impressed by the relentless beat, but a bit confused by the apparent lack of a recognizable melody. But opinions are bound to change once that video sees its debut—never underestimate the power of Ms. Knowles and good choreography.