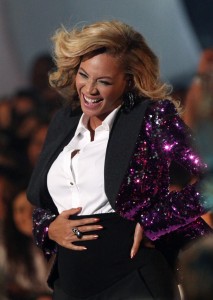 Beyonce made the announcement that she is pregnant, this week, at the MTV Video Music Awards in Los Angeles.

The news came as a surprise to the star’s fans as both Beyonce and Jay-Z are know to be a private couple and never reveal anything about their personal lives and they have previously repeatedly ignored and denied such speculation.

The baby’s gender is not known yet, but there has been reports that Beyonce wants a boy.